Gabriela (Gabi to her students) leading a dance exercise

Text and photos by Jennifer Block

You’d be forgiven for thinking La Cambalacha is just another summer camp for kids. The place spills forth with color and laughter. On stage, a group of children practice a clown routine; another group makes crafts with empty cans and paint outside; another, the really little ones, are scampering around three instructors, learning a song, raising arms and turning circles together as best they can.

But La Cambalacha, which roughly translates as “the interchange,” is more than what it seems. Nestled inland from the lake in the village of San Marcos la Laguna, on the serene Lake Atitlán, the youth arts initiative is actually doing something quite radical. Something that its founder, Gabriela Cordón, hopes will transform Guatemala from the inside out.

Cordón is trying to restore creative expression to the local Mayan villages—indeed, to the entire country. “Children in Guatemala learn two songs in school,” she tells me, then sings one of them, “Vuela mariposa…” with more than a dose of derision. Even though the government passed educational reforms that require all schools to offer a course in expresión artística—and more children than ever are attending school —Cordón isn’t convinced: The teacher’s get a week of training to teach art, all forms. This reflects a general sentiment toward the arts in Guatemala, says Cordón. The Mayan arts traditions have been all but lost (one dance troupe, based in Sololá, performs the only known pre-Colonial dance theater piece). “The arts were lost during the colonial conquest but also during the religious conquest,” says Cordón. And conquest and conflict have left the country, still, she says, under a blanket of silence and fear, the enemy of free expression. Cordón is trying to lift that blanket.

“We have the right to recreation, to expression, to learn new things. You get to know yourself through art.” —Juanita Puzul 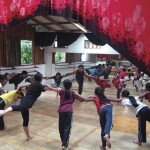 Gabriela (Gabi to her students) leading a dance exercise 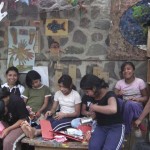 A craft-making group working with cans and paint 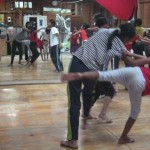 Cordón (above) is training a future generation of creative ambassadors including 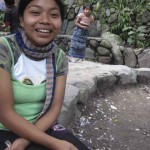 Juanita Puzul (below), a natural performer who went from student to instructor 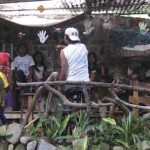 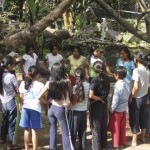 Juanita instructing a group of older girls in a game

Not that it’s been easy. She struggles for funding and it’s taken her years to gain respect in the community. She’s faced resistance from parents and from the church, and after six years still only about 5 percent of children in San Marcos walk through La Cambalacha’s open doors. Which begs the question, how does Cordón get the children who do come? How does she win over their parents? “We don’t negotiate with the parents,” she tells me. Instead, La Cambalacha organizes a street parade through the barrios, inviting the children to join. The parade wraps up at the basketball court. “Then we announce to the children that every Wednesday at 3:15, we’ll be here,” says Cordón. “And they come back.” The workshops are free to young children, and about 30 kids and teens get scholarships to attend part time and full time. The children’s scholarships, Q150 a month, are for their families: “It’s the equivalent of the firewood they could collect in the time that they’re here,” says Cordón.

Lorena Roffé, a volunteer from Argentina who came for two weeks and has been there two years, tells me with complete sincerity that she’s seen La Cambalacha change lives. “They start not talking and they finish singing,” she says of the children. Cordón, who left her native Guatemala City for dance training at the University of Illinois and had her own company at age 19, says it can take months to get the children comfortable using their voices, moving their bodies. This is especially true for the girls, who grow up wearing the tight corte skirts and huipiles, unable to run easily or move their arms above their heads. At La Cambalacha, everyone wears sweats and T-shirts. For the girls, it’s the first time they’ve worn pants.

Juanita Puzul began with La Cambalacha in 2004 when she was 16 years old; now she’s an instructor and a natural performer. But kicking her legs up during a performance has meant defending her virginity afterward. “My family is like, don’t you have respect for your culture? I have friends who tell me I can’t enter the church.” She’s learned to shrug off the comments. “We have the right to recreation, to expression, to learn new things. You get to know yourself through art.”

“We’re trying to change behavior, to help these kids communicate, be more self confident, more expressive, stronger, more free,” says Roffé; Puzul nods, a radiant example. We’re sitting in the fire circle under an avocado tree, and a large one crashes onto the roof like a cosmic exclamation point.

Lorena tries to put this in perspective for me. “You and I had the opportunity to play, to be creative, to express our feelings when we were children,” she says. “That’s a need of all of us, to share that and give that opportunity.” As I’m taking this in, children from every direction line up nearby, and one of the volunteers calls out numbers, handing out piles of clothing: It’s 5 o’clock, time for the girls to change out of their sweats and back into cortes.

They take turns using their skirts as dressing curtains for each other, giggling. About 70 children attend La Cambalacha; 15 of them are teenagers and young adults, who, like Puzul, go out into the local communities to teach in schools. This is key for Cordón: She’s training a future generation of creative ambassadors. So far they’ve taught workshops to thousands of schoolchildren. And in partnership with Caja Lúdica, an organization with direct ties to the Ministry of Education, La Cambalacha can now offer teaching certificates to its graduates, so they can get jobs and further arts education in Guatemala. Fifteen will hold the certificate by the end of this year. She also hopes her alumna will strike out on their own and, like her, start new community arts initiatives. Says Cordón: “I want places like La Cambalacha all over the country.”