Set at the northern end of the enormous Plaza Mayor, Guatemala’s National Palace is the origin of all the roads in the Republic with a spot known as Kilómetro Cero. Two and half miles north of the gleaming chrome-and-glass towers that line the Avenida La Reforma, the edifice is flanked by the Biblioteca Nacional to the west, the colonnaded arches of the Portal de Comercio to the south and the cathedral backed by the Archbishop’s Palace to the east. Where are we? Zona Uno, the city and country’s historical center, built in waves of different construction styles, cobbled together with remnants of some of La Antigua Guatemala’s rubble and finally concluded with the completion of the National Palace in 1943.

Guatemala City, founded in 1775 following the series of devastating earthquakes that brought La Antigua to her knees, was originally modeled on the Spanish urban colonial design of large plazas and wide streets running geographically north-south and east-west, but with significant differences. The Plaza Mayor is heroic in scale, perhaps a quarter of a mile wide and 800 feet across, including a large fountain with a reflecting pond and shaded by numerous trees.

The Plaza Mayor is heroic in scale including a large fountain with a reflecting pond and shaded by numerous trees.

The stylistic differences between each of the building periods are striking. The Cathedral and Archbishop’s Palace retain a colonial style, but the Portal del Comercio boasts a neo-classical façade. The newer almost post-modern National Library seems incongruous, being half-hidden by the bandshell and the flowering bougainvilleas shading benches which are used by nearby idlers and peddlers. The city grew outward from the plaza, and the architectural styles reflect the differences of the 230 years that have passed. Originally, the “Mudejar” style of building — with the closed walls to the street side, an interior patio with fountains and colonnaded rooms along the inside square, as noted in La Antigua — created a uniformity of private residences. As time and tastes changed, combined with the collapse of various governments and the occasional earthquake, Zona Uno became more of a European-style city center.

When the ecclesiastical properties were gradually expropriated in the 1800s, they were converted to public buildings, further changing the architectural mix. Today, the National Palace sits as a well-tended (and guarded) grandfather might, keeping an eye on the older domed cathedral on one hand, the Greek Revival-style commercial block off in the distance and the out of sight/out of mind National Library hidden as well as possible to the right.

In the streets branching out from the palace are hidden smaller plazas, the occasional Art Deco-style building and the faded remnants of a once-prosperous past and more popular urban center. As the urbanization spread outward, new suburbs were created and with the increase of wealth and population, demand and desire dictated a different life-style. Zone One remained the government center but newer buildings in different zones shared the power. The commercial center continued to be a warren of shoe and jewelry stores. The Mercado Central was moved to the east, on the sunny side of the Archbishop’s Palace. There is now an underground parking lot beneath the plaza, and the pigeons arrive early for the snacks. Candy sellers and other vendors, a throng of women with handicrafts, and busloads of children arrive early in the day. The fountain is turned on at 9 a.m. as the squad of special army forces in their camouflage uniforms come trooping across the square. They march to the 100-foot-tall flag pole and disassemble in careful steps, flanked by men with red berets carrying M-16s.

The flag is slowly unfolded and the eight men detailed to hold the 20-by-50 foot blue and white national symbol are very careful not to let any part of it touch the ground. Gradually the eyelets of the flag are connected to the snaps on the halyard. Two men are detailed to slowly pull the nylon line, and the flag is gradually urged upward. When at last the fabric is completely fastened and rises above the plaza’s dusty stone footings, the squad re-forms into a square of green and beige patterned soldiers. The enormous flag, now safely raised to the top of the aluminum pole, flutters gently in the breeze.

The troops march back to the palace and continue around the corner, rifles at the ready. The pigeons eat corn. The barkers and hustlers in the shaded corners resume their spiels. Fruit peddlers push their heavily laden carts about, filled with mangos, pineapples and papayas. To the east, the morning vendors of the Mercado Central arrive with their wares for the day, pottery, paintings and potables. This is Zone One. The clatter of steel-shuttered stores in the Portal del Comercio can be heard, as one by one, the doors go up and the lights go on. The gothic hands of the clock high on the tower of the cathedral slowly twitch, counting time as they have for the last 200 years or so. The sense of history is everywhere, and the ghosts of the past are probably not happy with the buses belching black clouds of diesel smoke as they pass through the square. Tempus fugits. 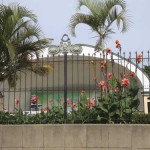 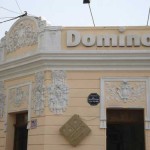 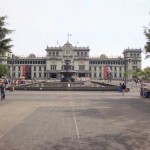 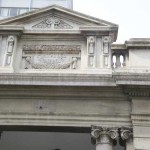 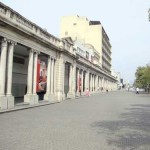 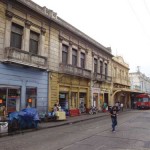 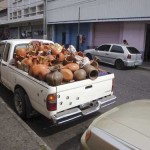 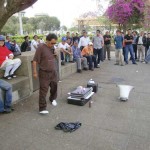 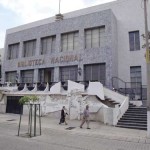 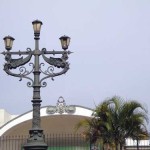 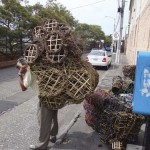 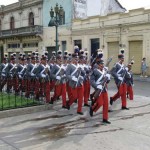 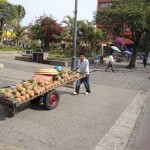 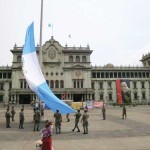