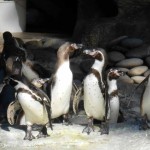 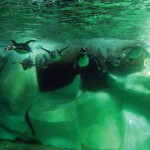 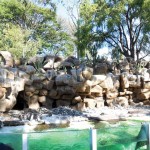 Part of the penguins’ new habitat

Twelve Humboldt penguins have become the star attractions at La Aurora Zoo in Guatemala City. The aquatic birds arrived from a conservation park in France in May as part of a European threatened species program and have been settling in well to their new habitat.

“They’ve been adapting to the environment really well and to the people too. They really like swimming in the pool, and they’re eating well. We’ve also been lucky with the weather as the heat’s passed,” said veterinarian Andrea Castañeda, who is in charge of looking after the penguins.

The six male and six female penguins were donated by France’s Beauval ZooParc on the condition that Guatemala would try to breed them and deliver their chicks to other zoos in South America and, if possible, release others into the wild.

With money donated from local Guatemalan businesses over a four year period, the zoo built a 240 square meter aquatic park with a pool and nesting area to welcome their new guests. The pool holds 95,000 liters of water and is regulated at a temperature of between 19 and 23 degrees Celsius.

“The penguins can tolerate temperatures up to 28 degrees. They were in quarantine for three weeks, in air conditioned rooms which we gradually adjusted, so that they’d acclimatize to the temperature in Guatemala. When they came out into the area they’re in now they were so happy, they went straight into the water, and we couldn’t get them out,” said Silvia Rodríguez, another veterinarian at La Aurora Zoo.

It is the first time that there have been penguins in Central America, and the flightless birds have drawn quite a crowd. The zoo has had its busiest month since it first opened on Christmas Day in 1924 with a 20 percent increase in visitors.

“The general public’s reaction has been incredible—they’ve visited us a lot. We’ve had about twice the amount of people coming on the weekends, and they’re so excited and interested to learn about the penguins. Many of them have doubts because there’s no ice so they’ve been asking a lot of questions,” said Castañeda.

The penguins, which are between one-and-a-half and two-years-old, are native to Chile and Peru and are expected to grow to around 65-70cm in height.

Guatemalan president Otto Pérez Molina attended the penguins’ inauguration and congratulated his country for working towards the protection and preservation of endangered species.

“We’re confident that the Humboldt penguins will settle in well to their new habitat and what’s more that they will breed,” said Perez Molina.

Aurora Zoo, which is located in 5a calle, Finca La Aurora, zone 13, currently has more than 110 different species and almost 1,000 animals that can be observed by visitors. The park says it now wants to focus more on animals native to Guatemala and start conservation programs for these species.