The Story of the Ruins of San Jerónimo The spacious, bright and well-kept flowered lawn of the San Jerónimo ruins at the north end of Alameda Santa Lucía welcomes visitors to the site of a school that functioned barely four years and closed with five students. In Colonial Architecture of Antigua, Sidney Markman wrote, “Very little remains of the school building except for a short piece of wall on the north side.” Typical of colonial structures, the kitchen chimney off the south side also survives.

For the real story, follow that wall west along 1a calle. It’s a dusty, noisy bus route, and there’s no sidewalk. Just past the stylistic entrance, whose base rests about three feet underground, hangs a plaque identifying the chapel of the Jesús Nazareno de San Jerónimo, now known as the Jesús Nazareno de La Merced de La Antigua.

The first church home of the image, facing west out of town, can be seen from outside a barbed wire fence around the back of the ruins site. Garbage collects alongside the church nave, where caretakers also build fires and hang laundry. “Undoubtedly, San Jerónimo [church] is one of the most sober and simple, if not the most, remaining in La Antigua Guatemala,” say University of San Carlos researchers. According to La Antigua expert David Jickling, “Two small sculptures still intact in the façade are among the first built into the niches in Santiago.” Short and plain, the façade contrasts with the enormous La Recolección complex a long block west and the elegant La Merced two blocks east.

What happened here? For answers let’s see what was going on some four centuries ago in the early days of Santiago de los Caballeros, now La Antigua Guatemala.

Although three religious orders, the Dominicans, Franciscans and Mercedarians, had issued statements abolishing slavery, the Spanish wanted to avoid mixing of the races; but mix they did, resulting in complicated caste definition. “The Spanish never constructed a physical wall that separated the Spanish center from the indigenous periphery but created spacial and ideological limits,” according to the Propuesta al Valorización de la Ermita de San Jerónimo y su Plaza (University of San Carlos, 2001). Early plans for the town of Santiago even included boulevards to mark the borders of the ‘ins’ and the ‘outs’. These were never completed, but the tree-lined Alameda Santa Lucía marked the western border.

Ten neighborhoods (barrios) developed in the extramuros, i.e., outside the invisible walls, the barrios at the western edge of the city becoming the worst slums, according to historian Fuentes y Guzmán (Historia General de Guatemala). The fermented fruit drink chicha, made mostly in the poor barrios, was “…a very important clandestine industry for the urban economy.” The San Jerónimo barrio of craftsmen, shoemakers and tailors, at the northwest corner of Alameda Santa Lucia, was fraught with drunkenness and violence.

San Jerónimo was under Mercedarian care. It was off the nave of the humble church of that troublesome neighborhood that, in 1684, a chapel home was built for the image Jesús Nazareno de San Jerónimo, sculpted by Alonzo de la Paz in 1675.

In 1726, the Franciscans and the Dominicans already having schools, it seemed appropriate that the Mercedarians have one too. Funds were available in 1739, and construction began on donated property behind their little San Jerónimo church. It took almost 20 years to build the school; and just about the time it was finished, in 1757 the church passed from the administration of the Mercedarians to the parish of San Sebastián, leaving the Jesús Nazareno alone in the chapel.

At that time there were rivalries between the religious communities and, as if the road wasn’t bumpy enough, the matter of the school, established without a royal license, was brought to the attention of Spanish King Charles III in 1761. Tired of the impetuous, impertinent behavior of subjects in the New World, the Crown assumed its authority and ordered the school not only closed but demolished. It may have been a blessing in disguise for the struggling school of the Mercedarians.

Nonetheless, the property was considered too new and strong to be destroyed, and local authorities managed to continue the matter for a few years. In 1766 it was resolved that the site could serve as the Royal Customs House, incidentally relieving La Merced’s unpaid debt for wine and oil, and also that the worrisome barrio of San Jerónimo might benefit with the presence of military barracks. Modifications to adapt the facility included a stable for 150 horses along the south and east sides. This was all abandoned a few years later, when the earthquake of 1773 forced moving the Spanish seat to now Guatemala City. Then pillage took its toll.

The chapel continued in use until some time after 1804, when the Jesús Nazareno was moved to the church of San Sebastián and then to La Merced in 1883. As a point of clarification, an earlier Jesús Nazareno de La Merced image, sculpted by Mateo de Zúñiga, had led the last of the stragglers from Santiago to the new capital in 1778, where it remains today.
Restoration work at San Jerónimo in 1975 and 1998 by the Council for the Protection of La Antigua saved the all-but-forgotten chapel. Little is left of the scant decoration inside; the outside was even less decorated. As for the fine plaza and fountain, floods as well as use as a garbage dump had raised the level over three feet.
Now at home in a chapel of honor in La Merced, the much-venerated Jesús Nazareno “whose look penetrates to the soul” (Escultura Colonial en Guatemala) is carried in grand procession to the awe of thousands every Good Friday.

The school of San Jerónimo was not the only construction ordered torn down. Similarly, in 1740 the people of barrio El Tortuguero, at the south end of town, collected alms and began construction of a chapel for their image of Saint Joseph (San José), another work of Alonzo de la Paz. Historians say it was probably due to lack of understanding by the simple barrio folk that they went ahead without license from King Philip V. The Town Council had authorized the work; but, instead of approval when inauguration was requested in 1742, “the authorities in Spain took a dim view of the procedure and ordered the hermitage closed and the building torn down.” (Markman) Further, His Majesty fined the town treasurer for not opposing the project.
The work stopped, but, again like San Jerónimo, the building was not torn down. In 1759 the neighbors’ appeal for a place for religious service was granted. Construction restarted; and the building, made bigger and more beautiful after 20 years of delays, was inaugurated in 1762.

But the end came for San José with the earthquake of 1773, despite its preservation by smart, short and wide construction. After serving briefly as a temporary convent for the Carmelite nuns of Santa Teresa, the church, like much of the city, was abandoned when the capital was moved to what is now Guatemala City. The space eventually was used as a tannery until the 1930s, when it was declared a national monument. Its name was changed to San José el Viejo when the parish church of San José was founded within the cathedral in the early 1800s. The ornate façade near the center of La Antigua, on 5a avenida and 8a calle, no longer at the edge of society, is enjoyed by townspeople and tourists alike. The church is often the site of musical events.

One such event was a concert in 2008 by the Bach Ensemble of Leipzig, Germany. Having experienced its own isolation inside East Germany, the group presented a concert together with the Mayan AJ musical group of Chimaltenango to a diverse crowd in the Church of San José el Viejo and expressed hope that “our concert contribute to the annulling of prejudices in society.” It was a positive evening of culture mix on the very site of an ostracized group 250 years ago. 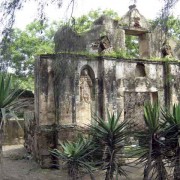 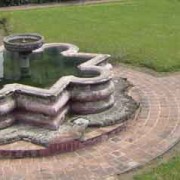 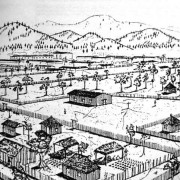 San Jerónimo barrio as it appeared in the 16th century, with 1a calle in foreground (USAC) 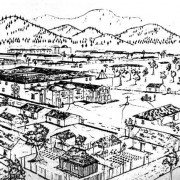 San Jerónimo barrio in 1773, with school built around plaza behind church (USAC) 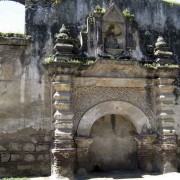 School entrance on north wall, with base about three feet below current 1a calle level (photo by Jack Houston) 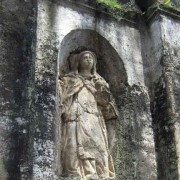 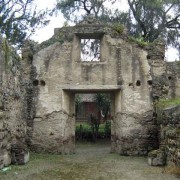 Entrance of church from inside nave (photo by Jack Houston) 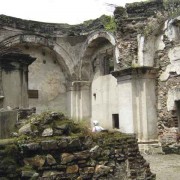 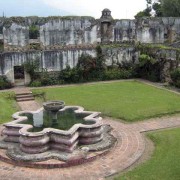 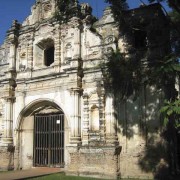 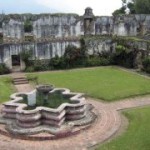