Last year, it was estimated that 1.2 million visitors were in La Antigua for Lenten and Holy Week. 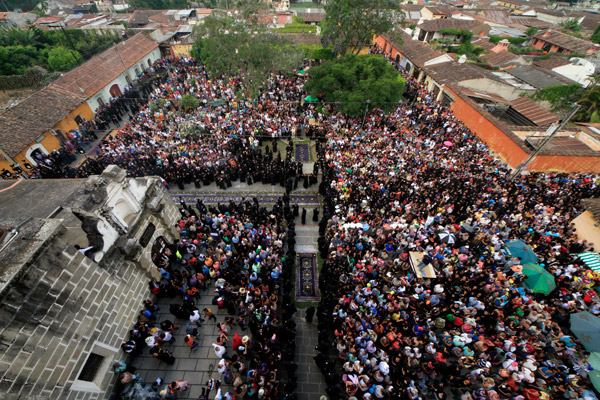 When the Spanish conquerors arrived in Guatemala from Mexico in 1524, they brought with them the religious traditions from Seville, Spain. Little did they imagine that in the 21st century these celebrations would become the largest in the world.

While some think that the now famous Semana Santa celebrations center on Easter Sunday, actually Ash Wednesday marks the start of some 50 activities during a 40-day period—not counting Sundays. Velaciones begin with the first Friday in Lent. 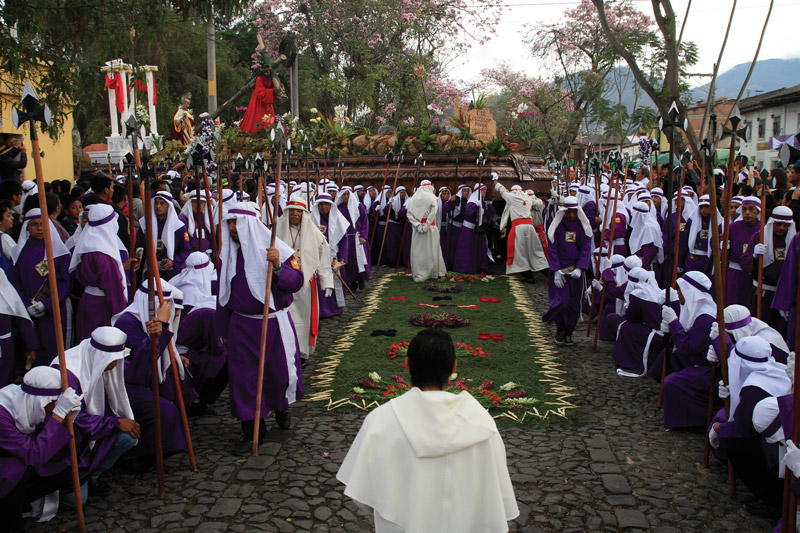 These are holy vigils with the processional figures placed on the altar with beautiful carpets surrounded by fruits and vegetables that represent that garden of Gethsemane. Processions begin with the first Friday in Lent with the larger processions every Sunday as the hermandades shine in preparing the most spectacular Lenten traditions. 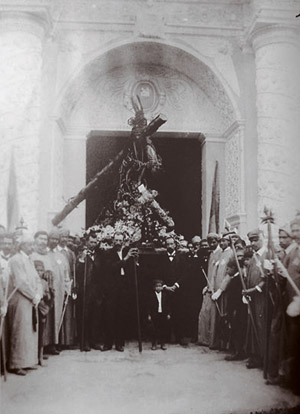 But was it always like this? Not at all. Historical notes show that the Christ floats in colonial times were small—carried on the shoulders of 12 devotees on rotation with other devotees. When the capital moved from Santiago de Guatemala (today’s La Antigua Guatemala) to present-day Guatemala City in 1773-74, all of the cofradías and processional figures moved with them.

Processions in Antigua resumed after 1808 and were carried by a few devote faithful. Señor Jorge Mario Armas, president of the Hermandad de Jesus Nazareno at La Merced, indicates that “the traditions we have today thrive on the faith from colonial times” and have been passed on from generation to generation. La Merced, indeed, has a long tradition of preparing velaciones and fabulous processions.

In recent years, the Hermandad of Jesus de la Caída from San Bartolome Becerra stepped up and added the fifth Sunday of Lent to the list of the largest processions. With a bit of “hermandad competition,” each has rallied to get more carriers, and ALL of the processions include more and more carriers each year.

As anyone may sign up to participate, they have grown…and grown in size. With more funds available from the cucuruchos and cargadoras who participate, the funeral bands that participate in the processions are much better!

They play funeral marches, mostly composed in Guatemala, behind the float of the Christ figure and another band for the Virgin Mary. In the 1980s, these were very small (sometimes out of tune) bands, but today they play exquisitely and add to the dramatic emotion felt throughout the streets of the city.

The processional routes are lined with the most incredible sawdust and flower carpets as this is a big part of these traditions. These are created and paid for by the people of Antigua. Catholic or not, everyone enjoys making carpets in front of their houses with the help of family and visitors.

Last year, it was estimated that 1.2 million visitors were in the city for Semana Santa (Palm Sunday – Easter Sunday), and we will possibly see more this year. The national holiday from Wednesday noon through Easter Sunday allows for day visitors from all over Guatemala to embrace these traditions.

We remind visitors not to carry purses, wallets or valuables to velaciones or processions as, with the crowds, we get professional pickpockets. A camera is all you need! 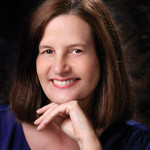