Cover of Lent and Holy Week in La Antigua

The third edition of Elizabeth Bell’s Lent and Holy Week in La Antigua hits the shops just in time for the crowds that hit the town for this year’s celebrations. When first approached in the early 1990s with, “You should do a book on Holy Week,” her response was, “What? We go into hiding during Holy Week!” But it did, in fact, seem like a good idea. Elizabeth’s greatest joy is researching La Antigua, so she began to compile information and her own observations of the previous two decades and published the first edition in 1995.
It captivated her, grew on her and now even Elizabeth Bell, from whom flows volumes of historical facts during her cultural tours and presentations, admits difficulty in finding words for the traditions of Holy Week in La Antigua. “I want to bring it to life on paper, and that’s very hard to do.”

Still fishing, she says, “There’s a Semana Santa moment. It’s a feeling, and it’s memorable. You never know when it’s going to hit you, when you’ll have it. It’s just like…wow! That’s what I’m looking for.”

Continuing to look and learn, she published the second edition of the book in 2001, repeating the compact pocket size. The latest edition is larger, matching Bell’s Antigua Guatemala: The City and Its Heritage. “Bigger is better for the photos,” she explains, which, excluding those of the vigils, are all hers. “Wonderful postcards of the vigils are available after 11 a.m. at each church of a vigil. Why compete with that? I took photos of those!” A vigil is held at the church to display its image the day before it is taken in procession. “The artistic quality of scenery and lighting is amazing, with fruits and vegetables representing the garden of Gethsemane.” The traditions have grown over the past four and a half centuries, but not much has changed in the past eight years. Chapters of Lent and Holy Week in Antigua include history, carpets, vigils, processions, sculptures and, new in this edition, funeral marches. “Most of them were written here in Guatemala. The composition is very basic. It’s the instruments that give them their oomph.” The edition also expands information about the images. “The real hair and glass eyes create an emotion in you. Guatemala has the finest Spanish sculpture in Latin America, the most expressive.”

The sculptures are town treasures, with hermandad groups responsible for their care and keeping and the activities of Holy Week, although virtually everyone participates. That’s part of the beauty of it. Colonial hermandades were social, religious and civic groups all rolled into one. Even today, religious celebrations such as vigils become festive with foods and fun outside the church. Carpet making is a family or group affair, following months of planning the production. From the simple to the elaborate, “The creativity comes from the heart. And the interaction is wonderful, with kids and grandparents enjoying together,” says Elizabeth excitedly, a new grandma herself.

At the back of the book are calendars for Lent and Holy Week for the next four years, a handy reference. Now a Holy Week enthusiast, Elizabeth wears a purple blouse weeks ahead and, with a sweep of her arm she dons “…matching purple sunglasses!”

Will there be a fourth edition of the book? She already has a notebook for it. “There’s always more to put in.” 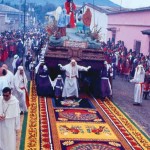 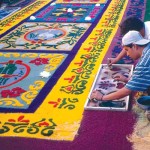 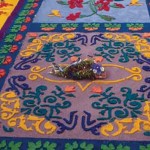 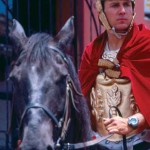 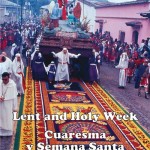 Cover of Lent and Holy Week in La Antigua 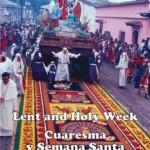