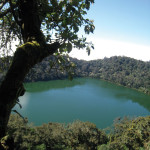 View of the lagoon from the top of the ridge 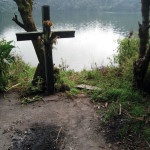 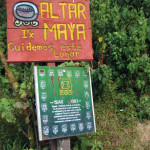 Maya calendar signs and alter on the trail 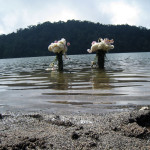 In the Newberry Award-winning book (and Disney movie) Holes, the hero Stanley Yelnats and his friend Zero survive in a barren desert after discovering a hidden lake tucked on top of a mountain. Though Guatemala´s Western Highlands are far from barren, scaling the breathtaking Laguna Chicabal makes you wonder if the author of Holes drew any inspiration from this local gem.

A microbus ride away from Quetzaltenango, the lagoon rests in the collapsed top of a dormant volcano. Not terribly large —perhaps a mile all around—the lagoon impresses visitors at once not only with its sheer beauty, but also with how isolated it is. More northern Minnesota than Lake Atitlán, this is the perfect day trip if you´re staying in the area and one of the few destinations that is probably more popular with locals than tourists.

The hike to Chicabal´s concave peak is a little over a mile from the base. The cloud forest around you and the rolling mountains beyond mean you will be more than happy to stop, and the view provides a better excuse than the elevation. The vista also makes the journey seem like every other Highlands hike—until glimpses of blue through the trees hint at something you´ve never quite seen before.

Part of the laguna´s appeal is its mystical (and mythical) history, a doorway to another world for many Mayas. While we watched from a lookout deck, clouds rose over the bluffs with remarkable speed, gathering strength and body before they twisted downward like an extinguished candle in reverse. Casting shadows that morphed across the water’s surface, it looked as if spirits from above were diving down to converse with creatures rising up from the depths. Before contact, the fog stopped and hovered at the surface, the black creatures below doing the same. The two never touched. Then sunlight broke through and the mist disappeared.

The lagoon impresses visitors at once not only with its sheer beauty, but also with how isolated it is.

The water is surrounded by signs marking the 20 sacred days of the Mayan calendar, translated into both K’iche’ and Mam (and it’s the Mam who find the location particularly hallowed). Because it’s used for rituals and sacrifices, swimming is not allowed. But that doesn´t stop an endless stream of locals from camping out on the surrounding shore. While a friend and I walked around, 20-somethings were setting up tents, families were building bonfires, and women were clustered around crosses with fresh ash at their base.

From Quetzaltenango, a microbus near Parque Benito Juárez can get you to the town of San Martín Chile Verde in about 40 minutes, depending on the traffic. Follow the signs until you reach a dirt parking lot with drivers offering to take you to the park’s official entrance. You don’t have to accept, but the hike will take you 90-plus minutes of uphill gasping, sucking in the dirt from locals who opted for the pickup. We chose the ride. (I was, however, probably ripped off paying a Q100 round-trip fee. Try for a lower fare). You’ll be dropped off near a large soccer field and some unfinished cabins. Pay the Q15 entrance fee, and you’re off to the top.