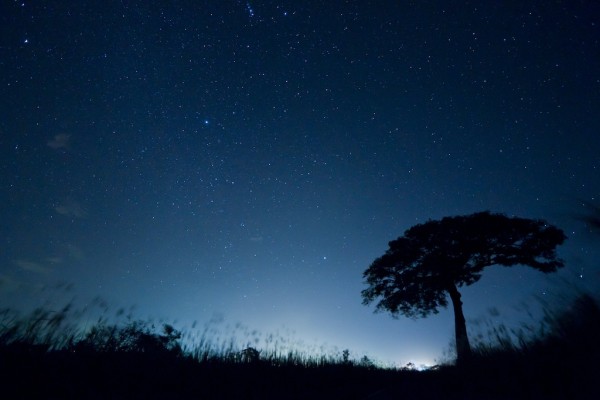 The rains will be starting soon and the burning in the fields may make for some viewing difficulties, but there will still be some good stargazing in the region in the next few months. Binoculars can help the viewing but there is no need for a telescope until you get hooked on the stars.

In early April the bright evening “stars” are really the planets Jupiter and Venus, one above the other and fairly low in the western sky just after sunset. Venus is brighter and higher while Jupiter is closer to the horizon and not as brilliant. Immediately above and to the left of Venus is the star Aldebaran, a red-colored star that is the eye of the bull at the start of the horns of the constellation Taurus.

During this month Venus will continue to rise while the rest of the stars and Jupiter will be closer to the horizon at sunset, so that by the end of April Venus will be higher than Aldebaran and Jupiter gradually becomes lost in the horizon’s haze or surrounding hills at sunset.

Meanwhile, in early April the moon will be in the eastern sky at sunset and on the 6th will just be rising as the sun sets: a full moon. The planet Mars will be immediately to the left (north) of the moon on April 3 but will be somewhat washed out by the moon’s bright reflected sunlight.

Three of the more interesting celestial objects are in the early evening sky this month: the constellations Orion (the hunter) and Taurus (the bull) and the asterism (group of stars) called the Pleiades or the Seven Sisters.

On April 3 Venus will be right in among the Pleiades. In Japanese the Pleiades are called Subaru, and the star group is part of the Subaru car insignia, reflecting the joining of six different companies to form Fuji Heavy Industries after World War II.

A special treat is available for anyone with a good southern view in the coming months. The smallest constellation, the Southern Cross, will be visible low on the southern horizon around midnight in late April, and into May in the early evening. It is called the Cruz de Mayo in these parts, and I will always remember the first time I ever saw it, from the beach at Tulate on the south coast some 45 years ago.

Stephen Stills said it all with his song of the same name. It does indeed look like a small cross with a bright star at each end of the upright and the slanted cross bar but with no star in the middle joint. It looks more like a child’s kite. A dimmer star on the lower right side completes the bright stars of this amazingly beautiful constellation. This smaller and dimmer side star is shown on the Australian flag but not on New Zealand’s.

Looking straight north in the early evening the asterism called the Big Dipper is easily visible with its distinctive long-handled ladle shape, now upside down pouring out its liquid onto the North Star, which is a faint star and probably not visible in the haze just above the northern horizon.

About the author: Phil Jones works in Central America and visits Guatemala to assist in microfinance. He combines his work travel with stargazing all over the world and has written columns and guided evening stargazing tours.