Side view of Vela’s Relief Map shows the actual elevations of the entire country. An observation booth

Relief Map is a 3-D wonder in the capital

Once upon a time a man made a map. Accompanied by a donkey, he traveled around Guatemala, took measurements of the country and then returned to the capital to scale up.

That man was engineer Francisco Vela, and with the help of his assistant, Claudio Urrutia, in 1905 he designed a three-dimensional cement map—the only one of its kind in the entire world. Drawn almost perfectly to scale (in relation to the original geography of the country) the Relief Map is an exact reproduction of Guatemala.

It features volcanoes, mountains, towns, roads, ports and rivers—one of which even boasts running water. With the country’s borders clearly marked and both the Pacific and Caribbean shown in blue, the model also incorporates Belize—since the Caribbean nation once belonged to Guatemala. In recent years a number of petrol towers have also been added to the map to ensure it keeps up to date with the country’s development.

Located in Minerva Park in Guatemala City’s zone 2, the Relief Map is hugely patriotic, paying homage to Guatemala and its culture in a multitude of ways. The concrete railing around the perimeter of the model is intricately designed with six medallions, each displaying a different symbol of Guatemala, from its national bird (the quetzal) to its national tree (the ceiba).

Even the small forest that surrounds the attraction consists of more than 100 hormigo trees, the wood of which is used in the construction of the marimba—Guatemala’s national musical instrument. Known as the “Sonorous Forest,” the trees were planted to commemorate the country’s marimba players and composers, many of whom are named on plaques within the forest. From the two observation towers positioned on either side of Vela’s creation, you can appreciate the diverse geographical reality of Guatemala. The complex level of detail is not only apparent in the naming of the country’s 22 departments, but also in the hundreds of smaller pueblos that are represented. The exact pinpointing of the country’s altitude, latitude and longitude along with the accuracy of the model—1:10,000km horizontal and 1:2,000km vertical—is an astonishing act of engineering that allows you to gain a bird’s-eye view of the country.

Having been praised as one of the “Wonders of Guatemala,” the 1,800-square-foot structure is a popular attraction in the capital. As you enter the site you are greeted with a monument showing the engineers measuring landscapes with a manually operated theodolite.

This unique open-air exhibition is now considered national heritage due to its artistic and historical value. Upon leaving you will be wondering how on earth Francisco Vela could have achieved such a feat without a computer. His creation, Guatemala City’s Relief Map, is a 3-D spectacular and is, hands down, the country’s foremost topographical guide. 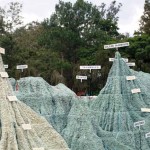 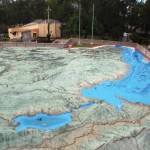 The small forest surrounding the attraction consists of over 100 hormigo trees, the wood of which is used in the construction of the marimba—Guatemala’s national musical instrument. 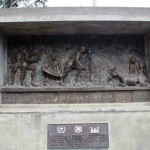