Guatemala’s ambassador to the United Nations this month assumes the presidency of the UN Security Council.

In 2011, Guatemala was selected for a two-year, rotating term in the Security Council (Jan. 1, 2012 through Dec. 31, 2013). Guatemala was unanimously supported for this role, and many UN officials saw this as recognition of Ambassador Rosenthal as among the most respected diplomats at the UN. 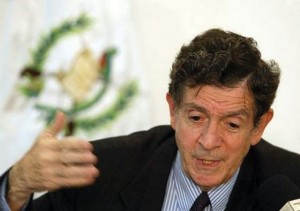 While Guatemala was a founding member state of the UN and has played an active role, it had not been a member of the Security Council because of the country’s turmoil during the 20th century. These circumstances have changed with the peace process and democratization of the country. Guatemala is regaining prominence, making it possible to be elected as a member state of the Security Council—a great new step for the country!

An excellent choice to preside over the Security Council, Ambassador Rosenthal has had a long involvement in the UN. Some personal background notes include being born in Amsterdam in 1935—he points out that his parents were making their way back from Germany to Guatemala, where his mother was born. His mater-nal grandfather had emigrated from the old country to Guatemala in 1891.

Mr. Rosenthal, who entered government service in 1960 as a part-time economist at the National Planning Secretariat, has degrees in economics from the University of San Carlos in Guatemala, an MBA from the University of California at Berkeley and an honorary doctorate in social sciences from Universidad del Valle, Guatemala (1996).

He has represented Guatemala in numerous national and international roles over the years, including serving as member of the Oversight Commission of the Guatemalan Peace Accords in 1998. He was appointed permanent representative of Guatemala to the UN in 1999, where he remained until 2004. In August 2006, President Oscar Berger appointed him minister of foreign affairs, a position where he remained until January 2008. In April 2008 he was re-appointed permanent representative of Guatemala to the UN.

Ambassador Rosenthal recently gave us some insights about the Security Council. Here are highlights from the interview:

“At the least, as a personal experience, it has been fascinating to have a front-row seat in the management of some of the most daunting conflicts in the world: the Israeli-Palestinian situation, the situation in Syria, the situation in Sudan and South Sudan, the situation in West Africa (especially Mali) and the situation in the Democratic Republic of Congo. At the same time, it has been sobering to actually have an active participation in trying to manage these conflicts. On the whole, the Security Council has not been all that successful at dealing with the most pressing of these problems (Syria), so the experience has also had its frustrations. But, on balance, it has been enriching, both personally and, more importantly, for Guatemala. I am proud to see our country participating in the ‘major leagues’ of international diplomacy, and, from time to time, actually making a difference. That is both personally and nationally satisfying.”

What questions does the Security Council have under consideration at this time?

“There are several categories of agenda items. One is the routine follow-up of all Security Council resolutions that have ongoing peace-keeping operations or special political missions, which total about 20 at present. A second is dealing with the 16 sanctions committees that oversee the work against terrorism and administer sanctions to states that have not met with their international responsibilities. And the third, and most challenging, is dealing with emerging conflicts or situations where you have ongoing conflicts. Syria is the most dramatic example, but we also have serious potential conflicts in Eastern Democratic Republic of Congo, on the border between Sudan and South Sudan, and in Mali, as well as Yemen.”

What is Guatemala’s position on the Syria civil war and how does that play into your role on the UN Security Council?

“Guatemala has, since the beginning of the conflict, condemned the government of Bashar al-Assad for committing mass atrocities against its civilian population. What started as a peaceful uprising has now predictably become a civil war. We support a political, Syrian-led transition, which responds to the grass-roots aspirations of the majority of the population. This means that sooner or later President al-Assad will have to step aside and let some type of temporary unity government administer the transition.

We do not support outside military intervention, which would, in our judgment, just make matters worse. And we still feel that there is a chance for diplomacy to win out over armed conflict, and that the United Nations will have an important role to play in such an outcome. On the other hand, should the government and the so-called Free Syrian Army elect to continue fighting, the cost for innocent civilians will be very high indeed, and it is hard for the world to sit by and watch this tragedy unfold. Hopefully, both parties will reach the conclusion that the cost is just too high for their country, and that the political, diplomatic outcome is a preferable option.”

When not in New York, Ambassador Rosenthal and his family live in Antigua, where they have been long-time residents. We are honored to have Ambassador Rosenthal represent Guatemala at such an important time in history. And on a personal note, the Rosenthal family, including his wife Margit and four daughters, are such nice people—great to have as neighbors!