Flowering of the National Tree 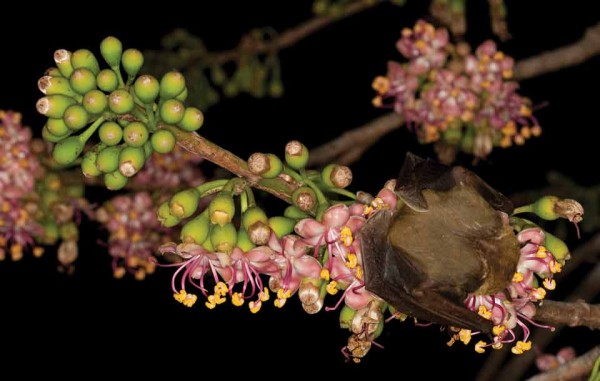 I estimate 200 or more bats converge on a single ceiba tree for the nectar released during flower blooming.

I have been studying and photographing the spines on ceiba trees for many years. I grow ceiba trees in my ethnobotanical garden, and we have even begun to shoot 3-D photography of the prickles. But in all the years, I have never seen a ceiba tree flower. Now I know why: They bloom only at night, and only for a limited period.

In late November it was possible to photograph two ceiba trees flowering near Monterrico (at km 133 and 145).

It is totally unexpected to have a ceiba tree flower in November or even December. Most botanical monograph and peer-reviewed journal articles report that the ceiba tends to bloom during the dry season (roughly December to April). But our photographs demonstrate that you need to get out into the field and look beyond scientific journals and you will soon learn that some species do not behave precisely as textbooks say they are supposed to.

What is correctly documented in botanical discussions is that Ceiba pentandra trees are irregular in whether they bloom every year. I have often seen groups of ceiba trees where only one of the group bloomed that year (even though I never saw the flowers, you can easily see the large fluffy seed pods for months after the tree flowers). Local people say that most of the large ceiba trees do not bloom every year.

To see a ceiba tree flowering, find a tree that is losing its leaves. Then check to see whether buds are forming. Then return to the tree about 6 in the evening to see if the buds are getting ready to open. Once the buds are ripe, they will pop open by about 7 p.m.

Actually, it is more like a symphony, with probably about 1,000 buds opening within a 20-minute period. A tree will continue to bloom for more than a week. But each individual flower lasts only one night; all flowers fall off the tree the next day. It is like a hail storm to stand under a giant ceiba tree during flowering season.

Flowers rain down upon you. And then bats arrive for the nectar; you also get a hail of buds since the bats’ activity knocks off lots of buds.

I estimate 200 or more bats converge on a single tree. Better wear a cap and old clothes, as you will be drenched in yellow pollen and wet nectar, and we suspected some of the “rain” was bat urine and feces! But the experience is well worth getting your clothes soiled. There was so much pollen raining on us that one of the camera lenses had to be cleaned off.

The bats did not attack us; they would come within two meters to alight on a flower bunch to suck the nectar.

The bats turned bright yellow with all the pollen, which stuck to their hair.

Ceiba trees are very common in Guatemala but to get the full experience you need a tree with low branches. We used a tall ladder to get even closer.

I do not yet have any evidence that ceiba flowers were portrayed in Mayan art, but seeing them all pop open within a few minutes, attracting hundreds of bats, makes the effort to find a flowering ceiba tree so worthwhile.

We will be posting additional photographs on our www.maya-archaeology.org website. 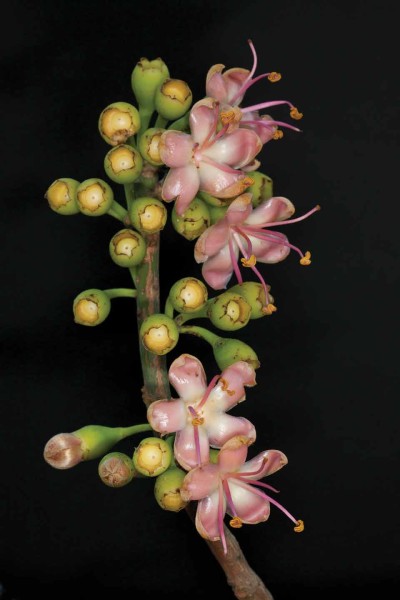 Ceiba trees bloom only at night and only for a limited period.