The staid, stone, Neo-Classical façade of La Merced Church in Guatemala City belongs there, designed according to the time it was built, early 19th century. So why the gilded, elaborate, full-of-movement Baroque altars that fit the niches inside the church? Because, some might say, they actually belong in the Baroque-façade La Merced Church in La Antigua.

In 1778, when Santiago de los Caballeros, then seat of the Spanish kingdom in Guatemala and now La Antigua, moved to what is now Guatemala City, “…the Mercedarians built their new church to accommodate the altars which had graced the abandoned building in Santiago. These were readily removed and reassembled where they are used at the present time,” wrote Verle Annis (The Architecture of Antigua Guatemala 1543-1773). The new church was built according to measurements of the altars to be relocated there.

In 1813 the new La Merced Church and, although not finished, the adjacent monastery were inaugurated. Seventy years later the government of Justo Rufino Barrios ‘nationalized’ some church properties, including that of the La Merced monastery. The space became headquarters of the national police, with barracks, a jail for more than 200 prisoners and a hospital. And so it was, with earthquake repairs in 1917-18 and 1976.

In 1999, through efforts of the Asociación Amigos de La Merced, use (though not ownership) of the prison space was returned to the church, which by then was in the care of the Jesuits. In 2006 use of the hospital area was granted. The police, the jail and the hospital had been an oxymoron in the space, like the Baroque altars behind the Neo-Classical façade; and dedicated professionals went to work.

Archeologists sifted through rubble to salvage every useful bit of information, while architects studied foundations, walls, columns and colors to restore and recreate the monastery space as it had been almost 200 years before. No longer a home for 25-or-so priests, it is now home to the Museum of La Merced. Under the dedicated direction of Ana María Urruela de Quezada, curator of the museum, church treasures were collected, identified and registered, cleaned and conserved.

Treasures of the La Merced Church formed the largest collection of those brought from the churches of Santiago. Some were lost with the passing of time, starting with the move in 1778 and including political changes during which artworks were destroyed or distributed, even to individuals. Safeguarding the thousand-or-so works the church still claims, the museum guide states: “Only in museums, archives, libraries, etc. can their permanence be guaranteed and avoid dispersion, illicit interventions and theft.”

The museum has four rooms with paintings, sculpture, including small ‘domestic’ sculptures, religious vestments and temporary exhibits plus a ‘treasury within the treasures’, with gold-plated silver items, crowns and relics of the church.

Artworks date from the 17th to 19th century. To name a few, there is a sculpture of the descent of Jesus from the cross, created from a copy of Rubens’ painting; a funerary altar with figures dressed in the mode of the 17th century, which has been exhibited in Mexico, Philadelphia, Vienna and Madrid; an 18th century, spiral crafted cross inlaid with tortoise shell, of Moorish style; a 7-yard-long silver rope belt; sculptures of both Saint Peter of Nolasco of Barcelona, founder of the Mercedarian order.

Looking to the future, yet to be restored is the remaining hospital part of the monastery. The goal is to house the archives of the archbishop and a school for art conservation and restoration of all kinds—sculpture, painting, textiles, paper, musical instruments. But for now the walls are still covered with hospital-green, 4-inch ceramic tile, the white tile floors broken here and there to reveal original foundations, drains and another stone entrance ramp.

Among the colonial church treasures moved to the new La Merced Church is the organ, which has been called the most beautiful in Guatemala and was played at the church inauguration in 1813. Refurbished in 1960 and 2002, music resounds from the lead pipes and horizontal trumpets, returning the organ, like the church and its treasures, to its original dignity. 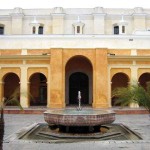 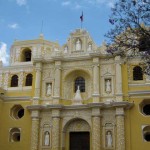 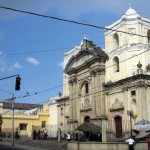 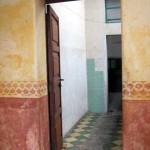 Connection to a restored section 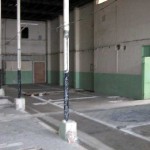 The current space under repair 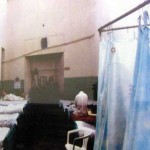 An old photo of when the area was a hospital 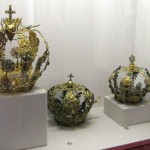 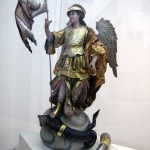 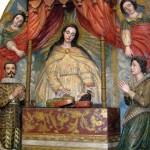 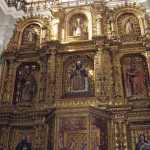 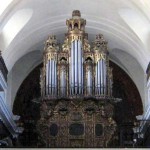 Organ of colonial La Merced Church, moved to the church in the new capital