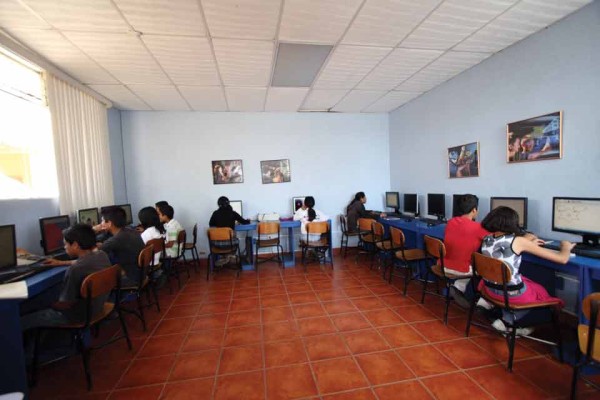 Students at work in one of the three computer labs

A shoeshine boy until last fall, Gregorio wants to be a doctor when he grows up. Thanks to an unlikely encounter on the streets of Guatemala City, he actually has a chance.

“I was going to school in the morning but working, shining shoes, in the afternoons. I met a man whose shoes I would shine. He got to know me. He started helping me—he got me better shoes and clothes. One day he told me, ‘I want to give you a scholarship to go to a really good school.’”

The generous businessman called Esperanza Juvenil to see if Gregorio could apply for the innovative program. When Gregorio was accepted, the man became a donor supporting Gregorio’s educational costs. Last December, Gregorio, 13, was able to retire his shoeshine box and now studies 50 hours a week as one of the 110 students at Esperanza Juvenil in Guatemala City.

“His client saw how bright Gregorio was and how much potential he had,” said Kristina Ostby de Barillas, Latin America director for the school’s parent NGO, Boys Hope Girls Hope. “He knew he shouldn’t be shining shoes.”

Rescued from the streets, violent homes or desperately poor family settings, the students at Esperanza Juvenil receive above-par schooling, loving homes if needed, nutritious meals and a solid chance for a lifetime of success.

“We work with kids who are motivated and want to continue their education and who have the hope of becoming a leader when they grow up,” said Ostby, who grew up in Palo Alto, Calif., and earned an MBA at Stanford University. “We’re not looking for geniuses, we’re looking for kids who can grow and thrive in the right environment.”

In each home they gather like family around a large, formal dinner table at mealtime, telling stories, sharing problems, exchanging laughs. Forty other students remain with their families in poor barrios around the capital and attend school each day. Esperanza Juvenil also has an apartment for the university students it serves.

Nearing collapse before a complete reorganization in late 2005, Esperanza Juvenil is now a jewel among Boys Hope Girls Hope’s 18 other sites in Brazil, Peru, Mexico and the United States. “Guatemala is one of the star sites,” Ostby said. “We’ve done a lot in the last five years that’s been unique. Others are coming here to learn from what’s working.”

For example, chores and extracurricular activities are a big part of the equation.

“The students get the best education, the best access to medical care—but they have to work hard,” Ostby said.

“We don’t spoil them, either. Most have one pair of shoes and we’re not afraid to put duct tape around the soles—anything we can do to make the money go further.”

Showing off the spacious home she shares with 11 other girls, Dayrin, 14, pointed out the kitchen and pila. “We wash all of our own clothes, and we help with cleaning and cooking,” she said, attesting to the requirements beyond the school day.

The school and group homes have a skilled, devoted staff of 25 Guatemalans. Teachers have college degrees, exceeding government requirements, and most pursue professional certification beyond the university. “Our teachers are lifelong learners,” Ostby said.

Students at Esperanza Juvenil spend 2.5 times longer in class per week than they would at public schools. Given the extended school day, 8 a.m. to 5 p.m. weekdays and 8 a.m. to noon on Saturdays, and year-round schooling, Gregorio will finish both fifth and sixth grades this year. The school day includes the academic curriculum as well as sports, dance, music, English, computers and other extracurriculars.

After working seven years on the streets of the capital, Gregorio is unfazed by the challenges of education and the added requirements of Esperanza Juvenil.

“I like to work hard and study,” Gregorio said. “When I came here I was very happy because I’ve never seen a school like this … I want to go to university and become a doctor because I like science a lot.”

Whether they’re from a capital slum or a remote village in Quiché, all students share a thirst for knowledge and a willingness to learn and work.

You see it in their eyes: bright, curious, hopeful. It’s what the Guatemala City businessman saw as young Gregorio dutifully shined his shoes.

A complete sponsorship is $3,000 per year; partial scholarships (education, food, housing) are also available. For more information or to donate, visit www.esperanzajuvenil.org 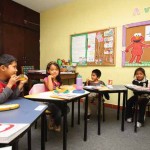 Serving students from kindergarten through university graduation, Esperanza Juvenil has a three-story, state of the art learning center. 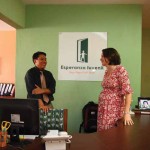 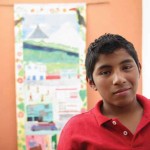 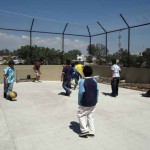