IN THE BEGINNING, THE EARTH WE KNOW slept under watery darkness, like the view before dawn from the island of Flores. Standing on the balcony of my hotel, I saw the Petén sky rippling down to the horizon on all sides. The lake slept, however, unmoving as the firmament. Still lake, rippling sky. This brought a feeling of standing on one’s head, or reeling. When Cortés came upon Lake Petén Itzá in 1525, he thought he had reached the sea. The waters can still appear rimless at times, especially in the dark.

The hieroglyph for “island,” pet, is a circle with a small circle at its very center. Add a flourish to its side and the glyph reads Petén, the old name of the island, which gave its name in turn to the entire rainforest region. The island and its people, encircled by their sea, remained sovereign until the eve of our eighteenth century, the last independent Maya kingdom. 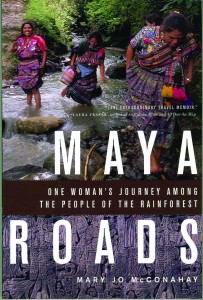 From “Maya Roads: One Woman’s Journey Among
the People of the Rainforest” by Mary Jo McConahay

Imagine. As Samuel Pepys tracked the flow of a recognizably modern London, a Maya king in Petén kept track of a trade network, with rest houses, that spanned hundreds of square miles. He compared obsidian prices from suppliers and maintained cacao plantations where the Río Dulce meets the Caribbean Sea. He danced before his people wearing jaguar hides, shells, and feathers until he entered a trance, crossing over for a while to the Underworld, then dancing himself back again…

Later that day, at Tikal, I looked for a certain calendar keeper, and found him walking a trail in a grove beyond the Temple of the Great Jaguar.

“Yes, I am,” he said. He wore a T-shirt bearing the logo of a defunct environmental organization, with a message that advised caution when using fire.
“I am looking for you,” I said. “For a visit.”
“Of course,” he said, without surprise.

Just as rain began to fall, we reached shelter under an overhang at his tin-roof house. He brought plastic chairs, and we sat silently for awhile. The rain created a gray-green scrim between us and the forest.
“I would like to know where to go on the equinox,” I said.

“Uaxactún was the college, the house of studies when our ancestors studied the movement of the sun,” he said.

Don Gilberto drew from his pocket a datebook of the tzolkin, the 260-day calendar used by Maya spiritual guides. He showed me the glyphs for the current month and day. He placed the book on his lap and studied a page.

“Uaxactún,” he said. “Yes, to be present for sunrise on that day.”

“Uaxactún is good because an old observatory is there?” I asked.

“Uaxactún was the college, the house of studies when our ancestors studied the movement of the sun,” he said.

They had to know the movements “so they could find the balance,” to measure the time of planting, to measure time. He seemed to take my mulling for a struggle to understand.

“Balance,” he said. “You have to weigh yourself to get on a plane, don’t you? Because the plane must keep its balance so you can arrive.”

I wanted his thoughts on the end of the Long Count calendar, which began 5,123 years ago, and ends December 21, 2012. The rain ebbed, trees taking on their palette of greens once more, moist and fresh.

“Many think there will be world war, or that the world will disappear at the end of the long calendar,” he said. But his view was more complex, even puzzling.

“The earth will not bear the cold. We are going to suffer more heat than now.”

“How can that be?” I asked. Heat and cold?
“The sun and moon will come in contact with the surface of the earth,” he said. “We must see how the earth handles the lowering of the sun and the moon, the being out of balance.”

We kill the earth and each other. We have become “excessive.”

“We have to revive what we have been killing,” he said. “If not, everything is smashed.”
I felt a chill despite the muggy air. Until now, everything I had read about the 2012 date spoke of astronomical phenomena, or of one mythological cycle ending and another beginning, like an odometer turning over. I asked him if feeling this way, knowing these things, did not make him fearful. The answer was no.

“Fear humiliates us,” Don Gilberto said. “We can die thinking of it…”

At 4 a.m. on the morning of the equinox, I walked to Uaxactún with Neria Herrera, proprietor of a former chicle gatherers’ outpost where I stayed after leaving Tikal.

The roads of Petén can shine white at night for the color of their clay, providing their own illumination. I didn’t need my new L.L. Bean camper’s flashlight after all. When we entered the forest, its canopy hid even starlight, but Neria knew the path. Soon the stone mountains, as the Maya saw them, the temples, loomed in the plaza. We made our way to the oldest of all, directly across from the three observatory structures.

But I felt satisfied, not wishing I were anywhere else on the planet but this crumbling stone palace, the observatory complex.

Ascending, I used my hands sometimes, feeling like the taquazin that famously scales the steep staircase of Tikal’s Jaguar Temple. Neria climbed more slowly. On the first platform, I stood, shook my arms, and paused to look up the final flight. There at the top of the pyramid, like Lords of the Night, two figures waited. Neria reached the place I stood, and followed my eyes.

“Buenos días,” she said weakly, although day was still far away.

“We didn’t think anyone was here,” she said.

“We didn’t think anyone else was coming,” said a male voice.

We climbed to sit below them. As often happens in Guatemala, Neria quickly discovered they were distantly related, throughcousins and in-laws. Then talk was over. The young men sat silently behind and just above us, like court attendants on Maya vases, handsome, mute.

The breeze blew cooler atop the pyramid. I pulled my nylon jacket tighter around me. But I felt satisfied, not wishing I were anywhere else on the planet but this crumbling stone palace, the observatory complex, Don Gilberto’s “college” of the ancestors, where Maya learned to follow the stars, the beginning of timekeeping.

We kept our eyes on the structures across the grassy plaza, waiting for light, just asthe astronomer-priests once did from this point. Designed purposefully to show the solar journey, the three small temples were set upon a single stepped platform, each with its own dais, perfect in their symmetry, the middle one larger but otherwise a mirror of the other two, with rectangular throughways cut into their precise centers. This was architecture as observatory, observatory as architecture.

On the autumnal equinox, less than an hour away, the sun was supposed to rise directly above the building in the middle, its roof now sprouting with bushes. Sensing the shapes of the stone structures in the dark rather than seeing them, I wondered at the marriage of science and grace. I felt close to fellow curious beings far in the past, who created such art for the purpose of under-standing the universe in which they lived.

Owls, opossums, and other nocturnal animals had gone quiet, and the earliest birds were not yet singing. There are places on earth that exude age and venerability, where you can feel the weight and richness of what has gone before. In perfect peace, we waited.