El Mirador — Champion of All

text and photos by Brent Holmes

This mighty, pre-classic city flourished hundreds of years before more famous classic sites such as Tikal. It was bigger by far. “The designation ‘classic’ should really apply to the pre-classic sites. Those classic guys never built anything like this,” says Dr. Richard D. Hansen “The Olmec, rather than the mother civilization of Mesoamerica, are now better considered a sister.”

I finally made my dream trip, by helicopter, to El Mirador. Thirty-five minutes by air vs. three days walking and/or mule ride makes the trip feasible for someone like me, not a lot of time, out of shape and pushing 68! Our group of 12 was ferried by chopper in lots of four from Flores Petén to the site. Dr. Hansen acted as our guide for the next 24 hours and gave generously of his knowledge and time. His passion is contagious. So far he has spent 25 years on El Mirador. He was a great host, even giving up his bungalow to five of the visitors while he slept in a tent.

El Mirador is one of the most significant Mayan sites and a must visit for those of us who are so fanatic about our studies of the Maya. Why is it so special?

For starters, El Mirador covers 38 square miles; it is larger than the city of Los Angeles. The temples at El Mirador are huge. El Tigre is larger than all of Tikal’s temples 1, 2, the acropolis and the central plaza—combined!

The El Mirador basin is larger still, encompassing territory northward beyond the Mexican border. It includes some 51 other cities, to name a few: Nakbe, Tintal, Paixsbán, Xucnal and Wakna, all pre-classic locations. Many cities in the basin were connected to El Mirador by a road system, sacbes. The roads are magnificent examples of the engineering skills of the Maya. They were 15 feet high and 120 feet wide, made of limestone and thickly plastered in white. You can see these roads by air, long straight lines with the foliage slightly elevated over the surrounding jungle. The walking/mule path route into El Mirador utilizes sacbes. A path was cut through the vegetation for man and mule using the base of the sacbes. This is a trip Dr. Hansen says he has made at least 200 times. The project has 126 mules that pack in supplies on a continuous basis.

The idea was to arrive at the summit and watch the sunset. We were late. On descent twilight quickly turned into pitch black. Most had flashlights. I did not. The path consists of partly wood stairs, a rope, vines, loose rocks and small tree stumps, two inches by six inches or so. My fellows tried to help, shining the light and calling out warnings, but, of course I slipped. I rolled sideways; I grabbed and started to roll downward but was caught by a fellow climber, averting a chain reaction affecting eight others below me. I did make it safely down but lost whatever ego I had on the way up.

We were rewarded by a visit to the adjacent Structure #34. This is a small temple that has been extensively tunneled. A string of ceiling lights, powered by a portable generator, provided light throughout the tunnel. I entered the tunnel behind Dr. Hansen. We were given hard hats, and it took about five seconds before the first crash onto the low ceiling. I was told to turn left and keep going until told to stop. “Do you see the stairs?” “Yes,” I replied, but I said I had no desire to go up them. No problem, he just wanted us to see the stairs of the original temple inside the temple. It was hot, humid, and if you had any claustrophobia, it was over-the-top challenging. All in single file, we turned around in the very narrow, low-ceilinged, not-shored-up tunnel and proceeded in the opposite direction. The group ahead of me (I was now in the rear) sort of crouch-walked past the entrance path. I smelled fresh air and decided I could miss the rest of the tunnel tour. The group stayed another 30 minutes, saw the temple inside the temple, with swimming carrying his father’s head, returning from the underworld. The frieze is of limestone and plaster, all covered with a pure white powder. But when Dr. Hansen wet his finger and touched the powder, a blood-red color came through. This monument was painted red, as was almost all in the city. The frieze is in nearly perfect condition and deserves a permanent protective covering, or a building to house it. Cost is $150,000. Donations gratefully accepted!

The next morning the group split up. We were four who wanted to visit Tikal. So together with Dr. Hansen we took the first flight out. He pointed out the sacbes and other cities that appeared as mere bumps on the distant landscape. He showed us the cleared areas that were actually bajos or swamps, as the Maya had encountered 2,600 years ago and made into fertile agricultural fields. He showed us massive present-day deforestation, the illegal encroachment into the park for lumbering or cattle grazing (narco cattle he called them), miles and miles of forest cleared. He talked with twinkle in his eye, proud of his project and left us greatly appreciative and impressed.

We arrived in time for Dr. Hansen’s 9:30 a.m. lecture at a conference room just off the helipad. The lecture hall was full, awaiting the rather dramatic arrival of Dr. Hansen, stepping off the chopper. Dr. Hansen returned to El Mirador after his lecture while we continued on to Tikal.

The Tikal trip was really interesting because of the comparisons: excavated and restored vs not; Classic vs. pre-classic. Visiting the famous central plaza flanked by two acropolis and temples 1 and 2 made it incredible to realize that all this could fit under El Tigre of El Mirador. It made us really appreciate, once again, the massive size of El Mirador.

So now I can say I have made it to El Mirador. If anyone wants to go, give me a call. Maybe we can make another trip, but I will not climb temples in the dark, and I will bring a good flashlight.

Note from the author: Any factual errors are mine, not Dr. Hansen’s. 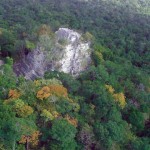 El Mirador — Champion of All 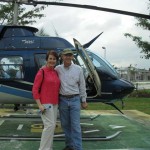 Ready to board for the flight to El Mirador 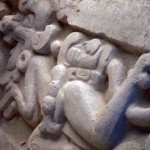 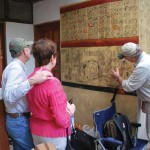 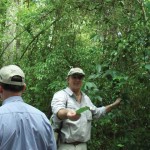 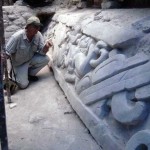 Dr. Hansen with a frieze depicting the Hero Twins