More than beautiful stone mansions, these were homes of real people with real lives, joys, and sorrows.

In Michener’s Poland (1983), a professor who clung to life in a concentration camp pleaded, “Rebuild! Rebuild!” as “the most important thing to do when this nightmare ends…an act of faith, an act of commitment to the future…a testimony to the greatness we once knew.” Proud Poles passionately rebuilt the historic buildings of their capital, the 700-year old city that had been mercilessly reduced to rubble in World War II bombings, literally picking up the pieces and putting them back together again like a puzzle. It took them 12 years. Big bronze letters set in the sidewalk record that in 1980 UNESCO added Warsaw, Poland to its list of World Heritage Sites.

One year earlier, in 1979, UNESCO added La Antigua Guatemala to the World Heritage Sites list, recorded on a large, colorful tile set in the outside wall of City Hall. This old capital of the Kingdom of Guatemala met destruction not by the hand of man but by earthquake in 1773. Rather than rebuild, the royal order was “Move! Move!” Some eager, some dragging their feet, the population relocated to the New Guatemala, now Guatemala City. It took some so long to get with the program that an order in 1777 required that the town be completely abandoned, destroyed and leveled to the ground.

Fortunately that never happened, although private homes as well as public buildings were stripped to reuse materials in construction of the new capital. Squatters moved into the leftover shells and recreated a peaceful life, a déjà vu of the beginnings of the town.

In 1541 Spanish nobles, driven from their homes in what is now Ciudad Vieja by a torrential mudslide, moved within months to re-establish themselves and their new capital just three miles away in what is now La Antigua. Their emergently built houses undoubtedly had simple thatched roofs. It took months and years to clear the necessary permissions from Spain for almost anything, including materials and conscripted Indian labor for the houses they would construct. Besides, even though they were nobles, many were not wealthy people. It was primarily an agricultural center, but in 230 years the capital developed in size and significance.

In contrast to the 12 years it took the Poles to rebuild Warsaw, rebuilding in La Antigua after the move in the late 1770s did not begin to happen for over a century, and a half century later more destruction happened than restoration, all in the course of modernization. By that time properties had changed hands, had been subdivided and redefined by commerce that came to the town with the coffee industry. Remains of few homes could be salvaged intact.

Homes of the colonial era commonly had a single, large, stone-framed entrance from the street to the zaguán. It was high enough for nobles on horseback and often wide enough for carriages. Some houses had a second door for business, but in most a smaller door was cut into the larger one for servants or others on foot. An entry arch led to a central patio, surrounded by a raised corridor off of which were the drawing room along the street side, dining room opposite and bedrooms along the connecting corridor. Kitchen and servants’ quarters were further back, off a service patio, with stables and carriage space also at the back or side of the house. This basic architectural footprint can be recognized in some current commercial establishments which were homes in the colonial era.

An example is the Hotel Posada Don Rodrigo, the large home of an apparently successful businessman in the 17th century, located on 5a avenida norte in the section of town that belonged to merchants. Other neighborhoods belonged to carpenters, others to ironworkers, others to potters, etc. In the 1960s the house was “…rather barren and obviously abused by those who have inhabited it during its long life,” wrote Verle Annis in The Architecture of Antigua Guatemala 1543-1773. “This is one of the few patios which is not filled with ferns, flowers, vines, trees, colorful birds and the sound of running water…A few flowers and shrubs…would completely change the atmosphere.” In 1968 the house was purchased and restored. A visitor today can see the transformation as well as the typical architectural footprint. The large, kitchen cúpula may be seen from the back patio, where the old washing pila remains.

Sturdily constructed two-part colonial kitchens, with corner ovens and low arches, were the greatest survivors. Kitchen chimneys and cúpulas have defied earthquakes for over four hundred years. The origin of this distinction of the La Antigua skyline is unclear but thought to have developed in the town itself.

House #6 on 4a avenida sur had two stories: business on the first floor, residence on the second, with kitchens on both. It was used as a hotel for years and then a presidential guesthouse.

House #12 on 4a calle oriente, now Doña Luisa Xicotencatl Bakery and Cafeteria, had similar construction. The place is named after the Mexican Indian princess whose father presented her along with a dowry of gold to conquistador Don Pedro de Alvarado, who became governor of the province. Don Pedro died shortly before the new town was established, but a prestigious property was granted to Doña Luisa and her daughter, Doña Leonor. The property known as Palacio de Doña Leonor, #8 on 4a calle oriente, extended all the way to 3a calle, where a hotel is today.

Doña Leonor became a prominent community figure. Two of her sons were mayors of the town, and the family acquired other nearby properties. Although nothing remains of the colonial construction, an elegant hotel has opened on the site of Doña Leonor’s residence. “I’ve made a promise to the spirit of that great woman,” says the current owner with a satisfied smile.

A fine home built in 1549, on the west side of the central plaza opposite the cathe-dral, became the residence of counts until 1775. The story goes that one of them, furious upon catching his wife with the butler, had the butler buried alive. This may have been confirmed when repairs after the 1976 earthquake uncovered a skeleton standing upright within the pantry walls! A remaining portion of the house is now occupied by Casa del Conde bookstore, shops and Café Condesa and Express, with the wide, stone entrance. The pila is at the rear of the café.

Because of Guatemala inheritance laws, ownership increases with the generations and sales become complicated, one reason why some remnants of colonial homes remain abandoned. Peeking through the window of one of these, where shoulder high weeds caress an arch, one wonders: Who lived here? More than beautiful stone mansions, these were homes of real people with real lives, joys, sorrows.

Jorge Luján Muñoz writes in Casa Guatemalteca (1999): “One of the most illustrative ways to understand a society is the study…of its domestic architecture…In residential architecture is seen clearly the constant overlap of past and future.”

Fortunately a few citizens, concerned about destruction by commercialization, united to have La Antigua Guatemala named a National Monument in 1944. Another wave of community action resulted in its being declared a Monumental City of the Americas in 1965, and in 1969 the Congress formed the National Council for the Protection of La Antigua Guatemala, forerunners of the UNESCO designation. Only by the perseverance of such efforts will the heritage of fine colonial homes be preserved.

The writer thanks CIRMA (Center for Mesoamerican Research) for competent reference assistance. Its location at 5a calle oriente #5 since 1979 has a documented history as a colonial residence of the 17th century. 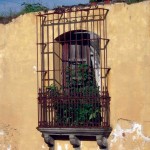 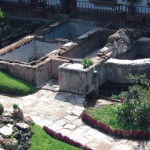 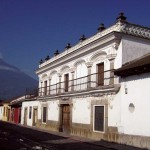 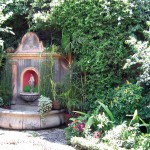 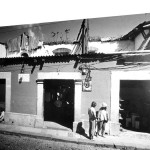 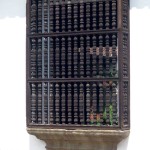