Flowers in the Mayan Diet 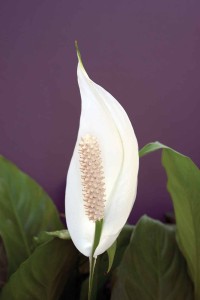 While in a hotel in Cobán, Alta Verapaz, Guatemala, we were photographing a beautiful peace lily flower, of the Spathiphyllum genus. Our Q’eqchi’ translator immediately told us that this flower is edible. Our photo assistant also said that his family incorporated these flowers in their meals. He is from the Guatemala-Mexico border area in the Highlands, not a Mayan speaker. The point is that two local people both indicated, in a matter-of-fact manner, that they ate these flowers.

Ilena García suggested the edible flower in Alta Verapaz was Spathiphyllum friedrichsthalii. Ilena is graduating with a degree in biology from the University del Valle, which is well known for its experienced faculty and their studies of flora and fauna.

Agronomist Ing. Juan Carlos Torres, owner of the Vivero La Escalonia in La Antigua Guatemala and a graduate from the respected biology program of the Universidad San Carlos, has identified the peace lily that his nursery sells as Spathiphyllum wallisii. Kew Gardens lists this as distributed from Colombia to Venezuela. The gardener working in the greenhouse said that the flower was indeed edible.

The Classic Maya would have had Spathiphyllum friedrichsthalii available to include in their diet. We photographed the plants from Vivero La Escalonia and though this species is from South America, it is 98 percent identical to the native species of Guatemala.

The word “flower,” however, is a lay word. In reality it is a “combination of spathe and spadix called the ‘inflorescence,’ sometimes referred to as a ‘flower,’ as the distinguishing feature of all aroids.” (From www.aroid.org.)

Many capable agronomists, botanists, ethnographers and field archaeologists have written helpful articles and monographs on the Mayan diet.

An excellent article by Cyrus Lundell in 1938, “Plants probably utiliz-ed by the Old Empire Maya of Petén and adjacent Lowlands,” is typical in the field of studies of agriculture and diet of Mesoamerica. Although his list is very helpful, and despite his many years of experience living and working in remote Mayan areas of Petén and Campeche, the list needs considerable expansion.

My goal is to literally find every single edible and utilitarian plant in Guatemala and adjacent countries, primarily to help local diets today. But I also wish to improve the lists of plants available 2,000 years ago.

I would be curious to know how many lists of edible plants include Spathiphyllum friedrichsthalii, which is of the family Araceae. Even an early edition of my own list missed this plant!

Yet all local people with whom I speak mention that they know full well it is edible. So there is a good future for getting more accurate lists of the plants that enabled the Classic Maya to sustain major populations in Petén, Campeche, Belize—much larger than modern populations in these same areas today.