I first became aware of Maria E. Martin at a Peace Corps Connect Conference in Austin, Texas in 2019. I was there to witness Guatemalan filmmaker Luis Argueta, whom I had helped nominate, receive the Wofford Harris Global Citizenship award. During the conference, Argueta participated in a discussion panel titled “Beyond Borders,” along with Maria Martin, the Director of “The Gracias Vida Center for Media,” and several immigration experts. I noticed that both Maria and Luis mentioned that one of their major goals was to “change the narrative” around Guatemalan migrants and give them a “human” face, so they would be treated with the dignity and respect they deserve. The conversation then turned to an examination of the historic exodus from Central America and the humanitarian crisis at the U.S. southern border. Some of the panelists underscored the need for policy solutions as well as opportunities for the Peace Corps community to act. 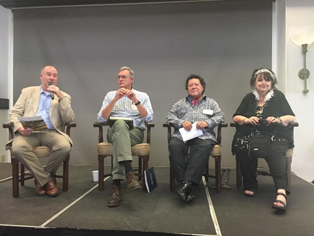 Two years went by before I heard Maria again, this time on a program about emigration from Guatemala that aired on the public radio program “Reveal.” The program focused on Todos Santos, Huehuetenango, and dealt with the challenges that forced local villagers to flee their home and go north to the U.S. in order to make a living. After doing some research, I discovered that Maria was the founder of the Gracias Vida Media Center, based in Antigua, and then I learned about her new book: Crossing Borders, Building Bridges: A Journalist’s Heart in Latin America. 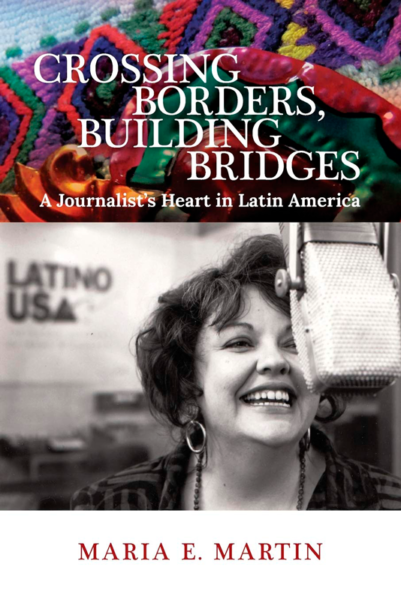 This book is an inspiring account of the author’s decades of work as a Latina radio journalist working across cultures, languages, and borders. In the book she shares a series of fascinating stories and photographs to describe her life’s journey. Maria was introduced to bilingual radio in northern California in the mid-70s and went on to volunteer for the “Somos Chicanas” program where she was given the opportunity to interview Cesar Chavez, the iconic leader of the farm worker movement.

Eventually, Maria went on to become the Senior Producer of “Latino USA,” where she reported on immigration from a policy, as well as a human-interest-story, perspective. One of her assignments with Latino USA included an investigation into the disappearance of Sister Dianna Ortiz, who was abducted and tortured in Guatemala in 1989. This led to the investigative report, “The Betrayal of Sister Dianna Ortiz and Surviving Torture: The Search for Healing.” 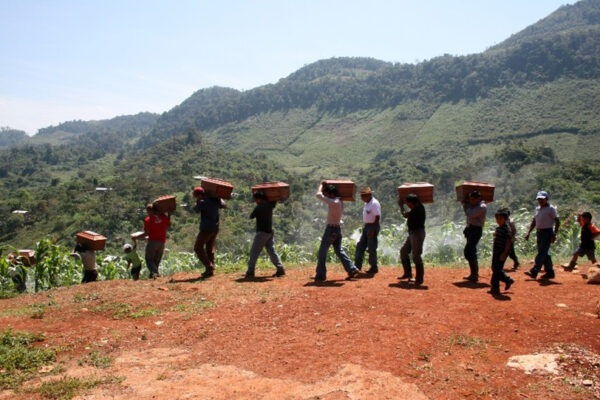 For decades, the Guatemalan government had been known for its abuses of human rights.

For decades, the Guatemalan government had been known for its abuses of human rights, but this story had an added layer because of the nun’s assertion that an American, “Alejandro,” was present in the torture chamber. The author’s ongoing research discredited the official explanation that the nun was a victim of mistaken identity (with a guerrilla leader), which was not at all plausible since, according to the author, Sister Dianna lacked the Spanish fluency of a native speaker.

The report’s broadcast date was scheduled for the tenth anniversary of Ortiz’s abduction and would be the author’s most ambitious documentary to date. She considered it a labor of love. In the end, Maria gained Sister Dianna’s trust and was grateful to Sister Dianna for having allowed her to share her story. Sister Dianna went on to become an outspoken human rights activist and advocate for victims of torture, and for her work Martin received the Robert F. Kennedy Journalism Award.

Maria Martin would go on to train rural and provincial journalists throughout Latin America, but especially in Guatemala. She counteracted the tendency for big-city journalists to look down on local reporters when they came to the provinces. Eventually, she would establish the “Gracias Vida Media Center” in Antigua.
Her commitment and vision for the future is reflected in her presentation in 2015 at the University of Texas event commemorating four decades of work in public radio: “Lives and careers come in cycles … Maybe now it’s your turn to give back to that mentor—that person who gave you support…” Her admonishment was to “pay it forward, pay it back.” Mandalit del Barco, Arts and Culture Correspondent for National Public Radio said it best, “The wonderful Maria Martin has been an inspiration for generations to follow her lead. There are so many of us working in public radio today who can testify how influential she’s been.” 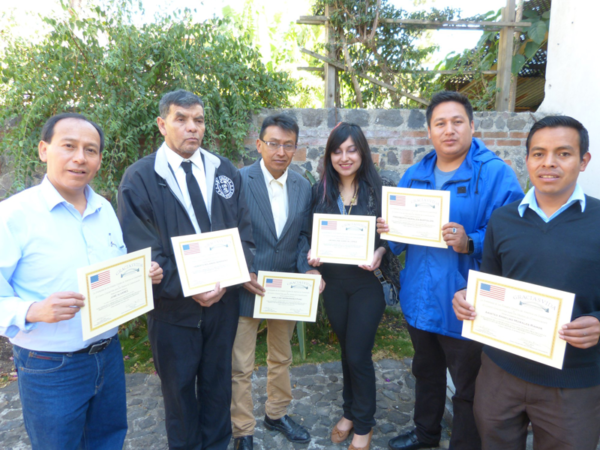 After witnessing her contributions to the panel at the Peace Corps Connect Conference and then reading her book, it became clear that Maria would be a natural addition to the documentary on emigration we began working on two years ago, Guatemala: Trouble in the Highlands, after an article I wrote with the same title was highlighted in the July 2019 issue of Revue Magazine. In the article, I reported that climate change, unemployment, and relentless grinding poverty were the underpinnings of the current migration crisis. There was also the historic reality of land and economic inequality and the nationwide infestation of the narcotics trade, which has led to near total government dysfunction.

This narrative would morph into the production of a documentary film, which was highlighted in the February 2020 issue of Revue Magazine. At that time, we reported that our focus would be what has happened in the past, what is currently occurring to fuel the U.S. border crisis, and lastly, what can be done to change the course of a cruel history. Our production team (which includes Hal Rifken, award winning cinematographer) had planned to have the project done by the end of 2020, but then all international travel was cancelled due to the COVID pandemic. On the positive side, this delay offered us an opportunity to further research our story, including learning how other documentaries had dealt with the issues of interest to us.

I was already familiar with the amazing work of Guatemalan award-winning filmmaker, Luis Argueta, whose 1994 film, “El Silencio de Neto,” was the first submission from Guatemala accepted into the foreign film category at the Motion Picture Academy Awards. His other films include “Abrazos;” “The U Turn;” and “Abused: The Postville Raid.”

Then, we were introduced to the work of Pamela Yates and the Skylight group, who focus on amplifying the voice of constituencies battling for social justice. Their most impressive documentary is “500 Years: Life in Resistance,” filmed in 2017. This documentary follows the trial of former Guatemalan President Efrain Rios Montt for genocide against the country’s indigenous Maya population in the 1980s and the popular uprising that ensued after the trial, ultimately leading to the toppling of then President Otto Perez Molina. It is the third film in a trilogy which includes, “When the Mountains Tremble,” and “Granito: How to Nail a Dictator.” Skylight is presently working on a new feature-length documentary, “Borderland.”

Having reviewed all of these impressive productions, we realized that they had already told the story of the Guatemalan Civil War, and the U.S. involvement and eventual intervention. Additionally, many compelling stories had already been told by Guatemalan families who had been forced to flee their homes and head north, so what could we focus on which others hadn’t?

Fortunately, Maria Martin reminded us of the paltry number of Maya representatives in the Guatemalan Congress (10% of the approximately 160); and that the number of Mayan leaders killed or disappeared was growing by the day. She then suggested we tell our story from the Mayan leadership perspective and focus on the growth of the Mayan political movement, which resonated with the entire documentary team.

With that, we recruited Maria to be our Executive Producer. After all, we concluded, she had already researched the issues we were focusing on and had a wealth of experience training Mayan radio journalists who could help us develop this new story line on the root causes of why 50% of the country’s population has yet to be represented properly in the governmental structure of Guatemala. 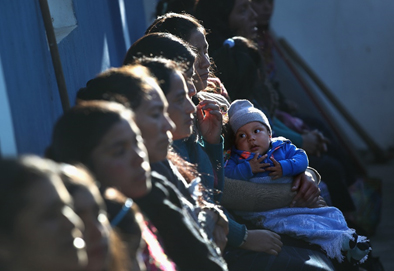 This revised version of Trouble in the Highlands explores the tumultuous history of Guatemala’s indigenous communities and why the Maya remain desperately poor, exploited, and outside the corridors of political power; how the lack of indigenous representation in government affects all aspects of life: the quality of schools, the availability of health care in rural areas, and respect for indigenous culture and traditions. Through the eyes of Mayan academics, activists, and political leaders, the documentary explores reasons why so many are leaving and what is being done to reverse the economic and social stagnation that causes it.

We have also introduced a new segment showing how Bolivia’s indigenous leaders achieved political success over a twenty-year period. There is no questioning the success of Evo Morales’ political party, MAS, which elected the first indigenous president in Bolivian history, as well as scores of indigenous representatives. But Bolivia also offers a cautionary tale for Guatemala’s political activists. Morales suffered many political setbacks during his years in power, but in spite of his many failures, the standard of living for a great many of Bolivia’s indigenous communities rose dramatically.

Working with us to develop Trouble in the Highlands will fulfill the goal Maria Martin stated at the end of her book, Crossing Borders, Building Bridges, “I will continue to make my contributions through public and independent media in the U.S. and Latin America. I will tell stories—in English and Spanish—that touch people’s minds and hearts, writing narratives that strive to improve cultural understanding among people.”

About the author Mark D. Walker
(MillionMileWalker.com) Mark Walker was a Peace Corps Volunteer in Guatemala,1971-1973, working on fertilizer experiments with small farmers in the Highlands. Over the next 40 years, he managed, or raised, funds for many international groups, including Food for the Hungry and Make A Wish International and wrote about those experiences in Different Latitudes: My Life in the Peace Corps and Beyond. He is also a contributing writer for Revue Magazine: Tschiffleys Epic Equestrian Ride; The Future of the Peace Corps in Guatemala; Maya Gods & Monsters; The Making of the Kingdom of Mescal; Luis Argueta – Telling the stories of Guatemalan Immigrants; Luis Argueta: Guatemalan Filmmaker Recipient of a Global Citizen Award; and Traveling in Tandem with a Chapina. His wife and three children were born in Guatemala.