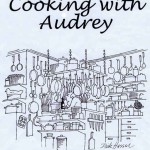 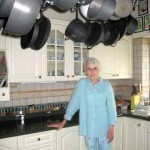 Cooking with Audrey is Audrey Buderus’ gift to her family and friends, including the Antigüeños who have been her friends for the past 26 years and to those of us who would like to be her friends. Through her small catering business, limited to “friends and friends of friends,” Audrey’s sticky buns at the Cloister in La Antigua, have become an anticipated tradition to follow the very early morning carpet walk of Good Friday.

If it’s the Christmas season, you must have Audrey’s eggnog. If you are referring to a Chinese dinner, it is the 12-course meal that Audrey prepares for 12 guests or more, maybe many more. These recipes, including the menu for the Chinese dinner, are included in Cooking with Audrey.

Audrey has given us all, yes all, of her catering recipes. In addition to those mentioned previously, recipes include those for her well-known Bloody Mary, for her cocktail party goodies and for her spaghetti bar. The spaghetti bar originated with a party that Audrey and her husband, Brooks, a retired architect, gave for friends: pasta accompanied by the choice of four sauces: chicken liver, white clam, meat and sausage/tomato sauces. The idea is to try a little of each, and then, maybe, a lot of your favorite. Not part of the spaghetti bar menu, but the pasta recipe I will try first, is Audrey’s penne with gorgonzola cream sauce.

In addition to catering, Audrey taught cooking classes in her previous home in Panorama, and recipes from her classes are also included. Chicken and wine sauce, a favorite, is described by Audrey as “easy and delicious.”

Audrey’s catering and cooking classes are part of her “retirement.” Prior to moving to Antigua, she lived on the island of Roatán, Honduras, for 27 years where she enjoyed “most of the time” working in a resort hotel as head of the kitchen, bar and dining room operations. She first visited Antigua in 1973, and many times after that, to buy for her own additional Roatán business, Audrey’s Bay Island Boutique. As the designer of much of the clothing sold in her boutique, she admired the típica fabrics of Guatemala.

It was through her buying trips to Guatemala that Audrey met many of the Antigüeños with whom she later enjoyed sharing recipes, and whose recipes she now shares with us. Alice Bell, mother of historian Elizabeth Bell, had a boutique which earns high praise from Audrey. Describing dresses bought there and lovingly worn for many years, Audrey points out Alice’s recipe for rum baba cake, first shared with Audrey, and now with us.

Credit is given for each recipe that Audrey does not claim as her own, and her notations make the cited recipe come alive. Jane Binaris’ spaghetti pie is described as one of the dishes that Jane often carried to sick friends, and with that the recipe has new meaning. In the chapter “And There’s Still More” (Chinese recipes that is, Audrey’s personal favorite) Audrey writes, “George Hull and I used to cook Chinese together and also shared recipes. This one is from George.” Cooking with Audrey is not only a collection of loved recipes, it is also the culinary history of the past quarter century of a special group of Antigua friends.

Audrey will be signing copies of Cooking with Audrey at The Cloister Bed and Breakfast, located at 5a avenida norte #23 (near the arch), on November 13 from 3 to 6 p.m. The event will be hosted by Helga and George Andrews, who have cordially invited the public, free of charge. Following the book signing, copies of Cooking with Audrey will be available through the author (email: abud@intelnett.com, subject, “Cook Book”) and also on sale in Antigua at La Casa del Conde, 5a, avenida norte #4, Central Park, and Hamlin and White Books, 4a calle oriente #12-A.