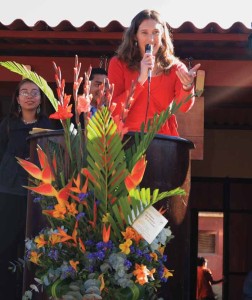 Built with an outpouring of support from both sides of the Atlantic Ocean, a modern new school recently opened in Jocotenango for over 500 children, many of whom might not get an education otherwise.

The spacious Escuela Proyecto La Esperanza has 20 classrooms, a computer lab, an audio-visual room, library, kitchen, psychology room and more. It also has access to playing fields and green space, thanks to the generosity of Finca La Azotea, which donated most of the 3,000 square meters of land on which the new school stands.

“This is a very special day,” British Ambassador to Guatemala Julie Chappell told an opening-day assembly of children, parents, teachers and supporters seated in the broad plaza on a cool January morning.

The school (kindergarten through third grade) is the centerpiece project of the Nottingham-based Education for the Children Foundation, whose chairman, David McKee, fought back tears as he addressed the audience.

“We have a beautiful building—but it’s just a building,” he said. “A school needs children who want to work hard and study. A school needs teachers with abilities but who also understand the problems of the people of Jocotenango.

“A school needs leaders with vision. But most of all a school needs a heart and a soul. La Esperanza has those qualities that make it a school,” he said.

Another of EFTC’s top benefactors locally, Ricardo Pokorny and Katie Cunningham of Finca La Azotea, provided a 75% discount on land costs. Children can go out the back door, through rows of coffee plants, and enjoy sports and games on a wide playing field, among other educational features at the farm.

Not only are children of Azotea employees enrolled at the 2,000-square-meter school, it also helps improve the community, Pokorny explained.

“If education improves in Jocotenango, I improve, Azotea improves, tourism improves,” he said. “It reduces violence … the whole town improves and reduces its sleeper community characteristics.”

The school replaces a smaller, rented site, where children didn’t have the opportunity to play outdoors.

“This school has space to think and study—but also to play, to have access to real grass,” Ambassador Chappell said. “This is one dream fulfilled—and we’re waiting to hear what the next dreams are, and we’re here to support them.” 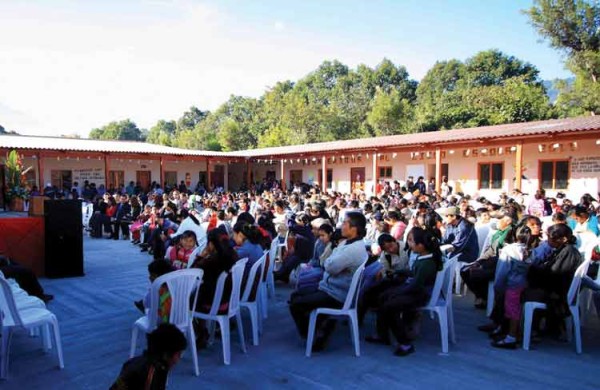