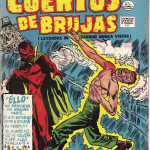 Superman and amigos to the rescue

Where can you find Godzilla, Teenage Mutant Ninja Turtles and He-Man living under one roof? At a new and unique store in La Antigua—¡Ay Robot! Comics.

When co-owners Dan Terzuola and Sarah Murphy moved to Antigua, they originally planned to open a hostel but soon realized there was already too much competition. When the owner of a toy museum called Xulik informed them there were no comics available in Guatemala, the inspiration for ¡Ay Robot! Comics was born.

“I saw something flash in Sarah’s eyes,” says Terzuola, “and I knew we were on to something.”

Unlike many enthusiasts who became fans during their childhood, Terzuola didn’t get into comics until his early 20s. After reading Scott McCloud’s book Understanding Comics while a student at Hunter College in New York City, Terzuola was hooked.
“Comics make your brain work differently than regular books. It’s a cerebral experience,” he says.

Business has been steady.

“Antigua is an international city with visitors from all over the world. We never know who will visit the store,” says Terzuola. “At least once a day we have someone come in and say how surprised they are to see comics in Guatemala.”

Terzuola explains that many kids here have never seen a comic book and he is happy to introduce them to this genre. “We want to change people’s minds about comics.”

Not only do they have time-honored favorites like Batman, X-Men and The Transformers in stock, they also carry Japanese manga comics and graphic novels. And they have comics in Spanish. “It’s a great way to learn a new language,” says Terzuola.
The store is a mix of recent and vintage goods with prices ranging from Q20-300 and up.

Currently, the inventory comes from the United States and Mexico, but soon the store will be branching into the European and Japanese markets. Shipments arrive once a month and yes, comic book fans, they do take special orders.

Says Terzuola, “If someone has read volumes one, two and three in a series and is looking for number four, we’re happy to order it for them.”

Comics, vintage toys, paper crafts and science fiction books aren’t the only items you’ll find there. The store also serves coffee, juices and snacks all while playing an eclectic mix of indie music.

“We wanted to create something different for Antigua,” explains Murphy. “Our store is a mixture of comics, coffee and kitsch.” Customers are invited to chill out at the table with a cup of coffee or relax on the sofa while looking through their comics.

With future plans that include a weekly BYOB Sci-Fi Movie Night, there is a lot of excitement brewing at ¡Ay Robot! Comics. Terzuola and Murphy also plan to create their own publication. “We see it as a home-grown version of Heavy Metal—but with art and articles from people in this area.”

While visiting the store, be sure to look up and gaze upon the myriad spaceships and robots dangling from the ceiling. “I love giant fighting robots,” said Terzuola. And if he and Murphy have their way, you will, too.

¡Ay Robot! Comics, 6a avenida norte #34, is open 10am-8pm Tuesday through Sunday, with extended hours during Semana Santa. It can also be found on Facebook.