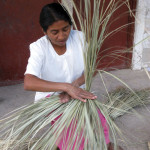 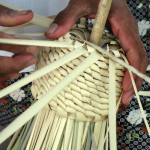 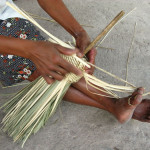 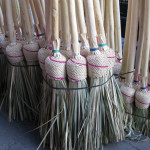 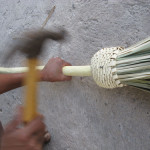 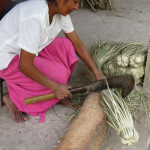 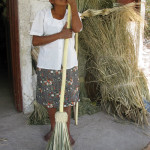 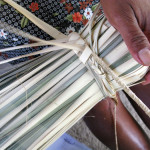 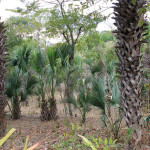 text and photos by Kathy Rousso

Palma real (royal palm) grows in Guatemala’s hot climatic regions, and many products can be made from the fronds of this tree. Custom dictates that the harvest takes place three days before the full moon, after which the fronds are dried and split into strips. The outer part of the strip is used for hats and the inner section turned into brooms. Palm can also be woven into baskets, around rum bottles or made into petates (mats).

Jocotán, Chiquimula is one municipality where palm brooms are commonly found. While sometimes sold in local shops, it is always best to buy from the maker, which requires an early Sunday morning visit, sometime before 9 a.m. This is the day of the weekly market, where brooms sell by the dozen. Besides Jocotán, I have seen the same broom style in San Francisco Gotera, Morazán (El Salvador), Purulha, Baja Verapaz and Colotenango, Huehuetenango markets.

One day I asked a woman selling brooms if she would be willing to teach me how they were made. She agreed, and on the scheduled day I took a microbus to a specified highway stop with detailed instructions of how to find her house. After an hour or so of wandering around the aldea I finally located her, with a broom in process.

Strips of palm had been bunched and tied together with a strand of palm. The loose strips were bent back to form a “head.” Mostly white strips are used, but buyers like a few green colored strips mixed in, so they are placed at intervals as well. A separate single palm strand was tied around the “broom” and individual strips of palm were inserted evenly spaced underneath it.

To hold everything together an interesting technique was used. A long, single strand of tul (rush or reed) was tied to the single palm strand, and as it wrapped around, toward the top, each added palm strand was looped around it in a half-hitch knot. Sometimes one or two brightly colored aniline-dyed strands are inserted, which creates a spiral pattern. The final step was to shove a stick into the center of the “head” and secure it with nails.

It always amazes me to learn intriguing techniques used for making relatively simple, utilitarian objects, and I often wonder where the idea came from and if there is more than meets the eye. Who knows, maybe once long ago, these beautiful brooms might have been a regal tradition, as is the case with petates, also made in Jocotán (although usually from tul).

Petates, an important utilitarian item, are also ritualistic and seen as a symbol of power. Ancient Mayan calendars were painted on mats, and Pop (mat) is the first month of the Mayan calendar. Once considered a royal tradition, each woven strip represented the reality of time and space, or the Mayan cosmo-vision, and only a ruler, known as “lord of the mat,” was allowed to sit on them.

So, it could be that besides sweeping the floor, brooms could also symbolize something else. After all, they are made from royal palm.

Kathy Rousso is an accomplished textile artist and writer. She is a frequent Revue contributor; her current book, Maguey Journey – Discovering Textiles in Guatemala, is available through the University of Arizona Press and online at Amazon.com