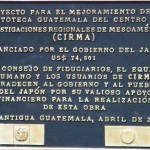 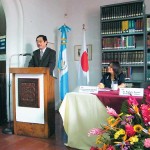 Japanese Ambassador His Excellency Kazumi Suzuki presents a donation to CIRMA in May, 2010 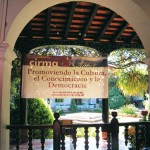 Entrance to the CIRMA building

Not far from La Antigua’s Central Park lies a newly refurbished Guatemalan version of Ali Baba’s cave. Walk two blocks east on 5a calle, past the original University of San Carlos and what’s now a museum. Then another half block to the ornate wooden doors and the dark red-brick exterior with a small sign that reads CIRMA.

CIRMA, or the Center for Regional Investigations of Mesoamerica, has a history dating back to 1978, when it began as an effort by two dedicated U.S. scholars to preserve Guatemala’s history. It has since become an international treasure and resource, visited by scholars and students from all over the world.

The Japanese Ambassador His Excellency Kazumi Suzuki was there in May, speaking of his country’s appreciation for the preservation of history and culture. Japan recently donated money for a new roof, structural work and a photo-processing wing, complete with new computers, cameras and scanners. Banzai, Japan!
Access to CIRMA, however, had been limited to graduate students or those academics who could provide a letter and a reasonable request to delve into the stacks–but that’s changing.

Part of the reason for the apparent mystery has been because of what’s in there. With over 7,500,000 documents and a million photographs, it’s taken a bit of time to organize things. When you have over 70,000 volumes of fragile books, dating from the late 1700s to the present, a limited staff and funds, this is not your typical used bookstore.

Grand plans for the future include a virtual museum of Guatemalan history, dating from 1808; the creation of the premier photographic museum of Latin America; the continuing international alliances with major universities; and the formation of presidential archives, to be given to the care of the government. The first collection of the illustrious President Juan José Arevalo is scheduled to be handed over to the Presidential Palace in the near future.

The staff is dedicated: Dr. John T. Way, Lucrecia Arriola de Paniagua and a few others are working to open the doors to the public and let the light shine in on the cultural treasures hidden within.

According to Mrs. Paniagua, anyone can now access the archives, historical or photographical. Come to the front desk and make an appointment. Send them email or call. The staff is helpful but limited. Hopefully, it won’t always be this way.