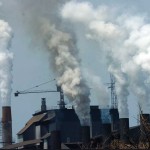 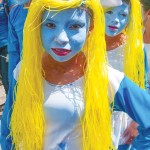 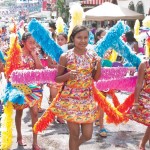 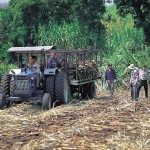 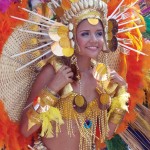 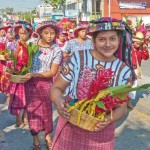 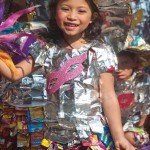 Mazatenango is affectionately referred to by locals as “Sugar City,” as it is surrounded by cane fields and sugar refineries. The growing public antipathy toward everything sweetened and flavored with genetically modified corn syrup has led to a real boom for Guatemala’s south coast producers of real, natural, cane sugar.

This current economic upsurge is reflected by the prosperity of the residents and their enhanced power of acquisition and ability to spend on non-essential things. I have been collecting images for a planned book on Mardi Gras and carnivals throughout the Americas. Instead of focusing on the big, commercially funded events in Rio de Janeiro and New Orleans, I plan to zoom in on the little-known carnivals, and they are many and diverse, throughout the hemisphere. I love color and carnival indulges in this lavishly. I remember some years back I had commented to friends how much I enjoy the “Mazate” carnival despite the fact that it is one of the poorest cities in the region. Though poor in funding, the people are rich in the joy of spirit and go all out with limited resources to make the most beautiful costumes adorned with painted peanut shells, dyed seashells and chicken feathers and red annatto (achiote) pods.

In 2013 everything changed. I arrived to find the streets of Mazate lavishly adorned with banners and the brash accoutrements of celebration. Commercial sponsorship, largely absent a few years back, was now massively present. The disjointed cacophony of distorting loudspeakers, some blaring out cumbia, others rock and still others carnival tunes like the macarena, charged the atmosphere with electricity.

Beautiful shimmering gowns resplendent with glittering Tortrix corn chip and Cheetos bags, discarded plastic spoons and forks, bottle tops, chewing gum wrappers and other twinkling bric-a-brac amazingly combine so as not to look like refuse at all.

All the many different groups and marching bands assembled down by the old train station. Revelers lined the main avenue. At 9 a.m., led by queens and dignitaries, the parade began. The current craze among carnival costume confectioners are elaborate creations made of 100 percent recycled matter. Beautiful shimmering gowns resplendent with glittering Tortrix corn chip and Cheetos bags, discarded plastic spoons and forks, bottle tops, chewing gum wrappers and other twinkling bric-a-brac amazingly combine so as not to look like refuse at all. Who would have thought that a beautiful girl dressed up in garbage would still look appealing?

Yes! Ecology is in, trashing the countryside is out! The procession made its way slowly through the streets, taking several hours to arrive at the fairgrounds. Along the way pranksters pelted the marchers with confetti-filled eggshells and water balloons. Watch out! An occasional mischief maker will throw an egg filled with flour, and that can be quite a mess. Motorcycle police and patrol cars were pelted mercilessly and soon were covered with multicolored muck. A kind of high-spirited anarchy took over but goodwill still prevailed. Everyone was living it up!

Then I saw a young boy point up at the sky and exclaim, “Look mama, it’s snowing!” And it was indeed snowing … but the “snow” was black! Black ash was raining down upon us—not volcanic ash, but ash created by the nearby ingenios, the sugar refineries where cane juice is boiled down to make the white granules so beloved by humans everywhere.

Nearly all big industrial operations, whether manufacturing plants, big agro or energy producers, are involved with what ecologists call “externalization.” Externalization occurs whenever the industry dumps toxic waste products into the environmental “commons.” Industries must be competitive while at the same time generate profits for their owners and shareholders. The core mandate of industries worldwide is to earn maximum profit. Therefore, every time an industry dumps poisonous substances into the environment instead of paying the price to clean up these pollutants, the operational costs are less, and their earnings are more. Virtually no industry cleans up its act independent of citizen pressure.

The point of why I am mentioning this phenomena is that Guatemala has some of the most beautiful skies anywhere on Earth. The rainy season stops in September or October followed by intensely blue skies with huge billowy clouds. This is the best time for taking scenic photos. How many times have people insisted that I must be retouching the skies in my photos? I try to tell them that I do not, that the Guatemalan skies are really that amazing; but people from Los Angeles or Berlin find it difficult to believe.

Carnival is a period of public revelry which takes place the week before Lent, which is a time leading up to Easter when Catholics fast and pray. It’s one last big bash before the proscribed time of penitence and abstinence.

In Mazatenango there are parades and events every day of carnival week, including a children’s parade, an adult parade, a parade of floats, a parade of horses and a parade of indigenous Maya. There are also numerous concerts, dances, and the Grand Masquerade Ball.

Then one day, in late November or early December everything changes as a thick bank of smoke rolls up the Pacific slope and covers the Highlands. This smoke is being generated by the sugar industry, and it is getting worse and worse every year as the industry expands.
First, before the harvest, the cane fields are burned. Later, even more smoke is generated as the cane juice is boiled down to make sugar. The huge boilers are largely fueled by burning the cane itself after all the juice has been extracted. Logic dictates that this smoke is contaminated by quantities of chemical pesticides, herbicides and synthetic fertilizers.

Is it possible to produce sugar without filling the skies with smoke? The answer is yes, but it would certainly raise the production costs, possibly making the Guatemalan product uncompetitive in the international marketplace. The sugar producers will also argue that their industry provides jobs for more than 35,000 workers. But the bottom line is that millions of people who live in Guatemala have to breathe that smoke, day and night, for months. There is no question that this causes physical illness in many susceptible or sensitive people, especially infants and elders. It’s like being forced to smoke a pack of cigarettes every day.

Eventually a solution will be put into place by international environmental laws that prohibit industries from engaging in externalization. The only way for the inhabitants of Earth to enjoy physical vitally and health is to make sure that the environment is healthy, too. It all comes down to each and every one of us making the decision that we will no longer tolerate the destruction, pollution and defilement of our Mother Earth.

The great work of the 21st century will be healing the Earth, and by healing our planet we will heal ourselves.