Birds of a Feather?

The new nation of Timor Leste has yet to choose its national bird. For the moment, though, a chicken appears both on a coin and on postage stamps. This might not be as bad of a choice as it initially appears. Chickens, considered objectively, are resplendent things.

Colonel Sanders would never have been interested in any of our local national birds. They grow slowly and likely have a taste that is more foul than fowl. Some of them steal and/or eat carrion. These are not exactly things you associate with “finger-lickin’ good.”

Electing a national bird should not be done lightly. When I note the choices made by national bird choosers (whom I will call “NBCs”) of the five countries I know best, I wonder what message they meant to send to their compatriates, and to the rest of us. And I wonder how coincidentally these birds reflect the character of the countries they are drafted to represent.

My first exposure to national birdism was the identity of my own—the bald eagle. Much more is known today about H. leucocephalus than was known in the day of its election. This raptor gets much, and in some cases most, of its vittles by bullying lesser raptors and, yes, by scavenging. (Maybe Ben Franklin was on to this when he vetted the turkey for the honor.) The bald eagle was an intentional, and predictative, projection of world-power status. The founders of the United States preached egalitarianism at home, but they aspired to eagle-itarianism” toward the powers of that day, all of whom were in Europe. The message here was “watch us!”

The caracara, another scavenging (and bullying) raptor, was chosen by Mexican NBCs. Central Americans bless this choice, since Mexico once had imperial ambitions in the subcontinent, and even today Mexico exercises enormous cultural hegemony over the region. And yet the caracara looks so unlike the bird immortalized on the Mexican flag that even some zookeepers in the Hispanic world do not know that it is a symbol of the largest entity in that world. Ironically, caracaras are stock tenants in zoos.

This much may never be true of Guatemala’s quetzal. One morning in 1988, while in transit to the Aurora Park Zoo for the first time, I was thrilled over my expected encounter, in the feather, with a live quetzal; but none was there. Ornithologists debate whether the quetzal can survive in captivity. Some say no; others suggest that, were a large enough aviary in existence, it could.

Neither did I see any quetzals years later when I visited the Mario Dary Biotopo Park. This reserve was set aside expressly for quetzals but, to this day, aside from a stuffed specimen at the Marriott, the only quetzals I have seen are those in my wallet. So is there a parallel between symbol and sovereignty? Yes. The choice reflects both the beauty of Guatemala and the willingness of her people, NBCs included, to die rather than endure captivity. The coincidental part is that the birds, like Guatemalans them themselves, are shyer than their counterparts elsewhere.

Honduras’ national bird is so familiar that it is at risk of falling into chickenesque disdain. That would be the scarlet macaw, known locally as the guacamaya. Of the five national symbols I am surveying, it is unquestionably the most intelligent, the most domesticated, the poorest flyer, the only vegetarian, and a bird that actually eats clay. They are almost as easy to catch as they are to spot; consequently few, if any, remain in the wild. Try bagging a bald eagle in a burlap sack sometime.

Guacamayas can, of course, talk or mimic. I am looking for the one who can confirm, in plain English, what I imagine is its own self-image. Maybe it would go like this: “I’m too clumsy to hunt, so I’ll settle for fruit. I’m too pretty and too slow not to be caught, so why fight it? And I’m smart enough to talk and to take mineral supplements (clay). So I’ll surrender to the domesticity of pampered patio living. I’m better than any cat.” All this may have gone to the guacamaya’s head. My Dad and I once encountered one in the lobby of La Antigua’s Posada de Don Rodrigo. It looked directly at us and garbled contemptuously. Dad replied, “Same to you, rude bastard!” But I remain an admirer.

I do not know what the guacamaya’s status says about Honduras, other than that Honduran NBCs made a practical choice. Unlike the elusive quetzal, no one has not seen a guacamaya. Their utility as a patriotic reminder is therefore limitless.

Until recently, El Salvador had no official avian symbol. But in 2010, Salvadoran NBCs anointed the torogoz. This bird is common, if relatively unknown, throughout Central America; taxonomists call the species in question the turquoise-crested motmot. It is as spectacular, in its way, as are the quetzal and guacamaya. It sports two tail feathers that are nearly bare but end in resplendent paddles. These are said to impress females and to alert predators not to bother; the torogoz, a good flyer, will take off. Unfinicky predators themselves, they eat even poison dart frogs.

Will everything from currencies to Spanish schools now be christened in the torogoz’s honor, as they are for other national birds? It has already happened; Salvadoran expats in Australia have opened El Torogoz Restaurant in Canberra. But what is the connection to the country, coincidental or otherwise? Well, there is no denying the spectacular beauty of El Salvador, and the adaptability of her people.

None of these five birds—eagle, caracara, quetzal, guacamaya, torogoz—can sing by any esthetic standard. They all, to a species, squawk or screech. But they are as varied as their constituencies. 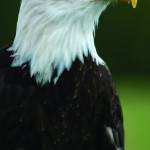 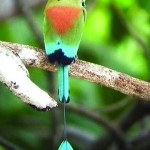 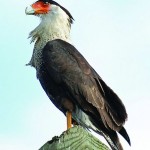