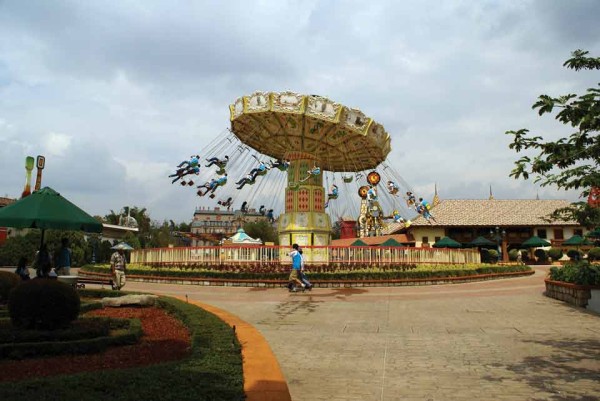 The first thing you’ll notice at the resort are the peacocks. Male and female, big and small, it’s like Noah’s Ark hit ground in the Highlands and covered the place with more birds than Ireland has sheep, strutting around like Freddie Mercury at Wembley.

A short bus ride out of Quetzaltenango takes you to IRTRA, a sprawling resort that stands out like a colony on the moon. The school I work for paid for a weekend retreat with the entire faculty, and we enjoyed our break from students by strolling through colonial courtyards (with peacocks), bowling at the private alley (near peacocks), and playing tennis (they have yet to train peacocks to retrieve your equipment).

There are two major waterslides near the pools, each slide is accompanied by lifeguards who don’t like it when you go down them attached to three other people. When chastised for doing just that, I realized that saying No puedo hablar español undermined my case.

More fun lies just a few blocks away in the form of two theme parks: Xetulul and Xocomil. The latter is a water park with all the bells and whistles: Relax in their lazy river, hit a few volleyballs and then swirl down a massive bowl. When waiting at the top of one of those super-steep speed slides, I suggest waiting for your ride-mates to start first so you can make all the Star Wars noises you want while you blast off the top into light speed.

Xetulul is divided into several country-themed sections. Want to admire the Trevi Fountain? Head to the Italian water ride. Need carnival games in the Moulin Rouge? Hang a right at Versailles. Dreamed about watching a live jaguar prowl the base of a full-color replica of Tikal’s Jaguar Temple? Done and done.

If you like roller coasters, you’ve come to the right place. After strapping in and swinging upside down, you’ll wish that you had waited until afterward for that plateful of lasagna. The entrance fees at the theme parks are reasonable—about $20—and they regularly offer promotions to different areas of Guatemala in the form of Q10 entrances, so befriend a local with tickets to spare. IRTRA itself is a bit pricier (Q500 a night is as cheap as it gets) but the same offerings would be considerably more expensive Stateside.

The “real” Guatemala this isn’t, but if you need a break from Spanish school or your visiting parents aren’t quite ready for dormitory hostels, you really will feel like you’re on Noah’s Ark—if the ark were a cruise ship. Grab your board shorts, pack some sunscreen and enjoy the peacocks. 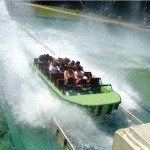 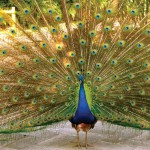 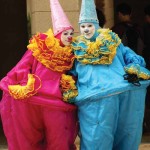