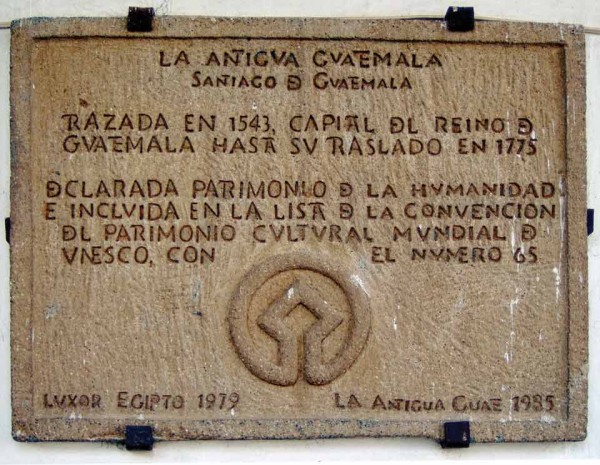 Antigua Guatemala was included as No. 65 in the United Nation’s Educational, Scientific and Cultural Organization’s World Heritage List during the World Heritage Convention’s Third Session in October 1979 in Luxor, Egypt. Today there are 981 sites that the World Heritage Committee considers as “having outstanding universal value… the protection, management, authenticity and integrity of properties are also important considerations.”

While UNESCO included the city in its list and offers criteria and guidelines for the city’s preservation, it is the Guatemalan government’s and the local population’s responsibility to carry this out. The government agency, National Council for the Protection of La Antigua Guatemala (CNPAG), was founded by the Guatemalan Congress in 1969 and had already begun its preservation efforts when the city gained world-class recognition.

Many of us received training abroad in various fields, including architectural conservation, cultural heritage and tourism to mention only a few. UNESCO experts were essential in getting the city on track for preservation beginning in the 70s. The CNPAG continues to be in charge of the city’s preservation. With an outdated protective law and a meager budget, the Consejo received about Q4million ($500,000) to do the job this year—it has been difficult to accomplish a world-class job of preserving what Guatemalans consider the country’s gem.

With the World Heritage Convention celebrating 37 years, attention by academics from many fields began to reflect on ITS heritage. Many issues were recently embraced in the conference at UMass/Amherst in May: The Past for Sale? The Economic Entanglements of Cultural Heritage. Different case studies were reviewed from sites around the world (including Antigua) and we could see that there are not always easy answers in preserving our past with an eye toward the future. It was noted that Antigua has requested very few funds from UNESCO over the past 34 years (there is no yearly stipend) although UNESCO has been gracious in providing support to the city’s efforts. What seemed like a monumental task in the 70s has become even more difficult as the city has more economic pressures than ever before.

With another anniversary, we reflect on the importance of being a World Heritage Site. Attention has been given to Antigua losing that category although the city is not on UNESCO’s World Heritage Convention’s “The List in Danger.” Antigua residents are concerned about efforts (and the lack thereof) in preserving Antigua’s cultural heritage. The municipality has difficulty enforcing laws particularly related to noise and after-hour bars that haunt the local residents. Salvemos Antigua, founded in 1999, and other civic groups have made headway over the years and continue to look for a balance between preservation and positive economic development: truly an on-going challenge in the city today.