A Gift from Dog

No, I’m not dyslexic, I really do mean dog 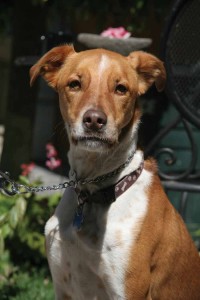 Chilly Willy is the dog in question and how he came to be ours is quite a story. My daughter, Kika, and I were walking our only dog Koko (a well-behaved, totally trained 10-year-old rescue dog from a beach in Belize) when we came across a young boy, totally distraught, as his dog had been hit by a car (hit and run) and she was lying in obvious pain.

We couldn’t move the dog, so we called our veterinarian, who came immediately and took the dog to his clinic.

It turned out she had a fractured pelvis and had to remain in the clinic for treatment. We, of course, paid for the veterinary services.

When Tequila (the injured dog) was released, the vet said she had to be corralled for a few weeks to help with the healing, and that on no account was she to become pregnant!

Yes, you’ve got it: Lo and behold we had a visit from the young boy portering Tequila in a wheelbarrow—obviously pregnant (Tequila, that is)—so back to the vet we went. We had to monitor Tequila’s pregnancy and when her due time came, she had a cesarean. It goes without saying: Tequila was then spayed!

My husband and I went off to the States for a few weeks and when we returned our daughter informed us that Tequila’s owner had been to our home to say that in appreciation of our help with Tequila, he wanted to give us one of her puppies. Just what we wanted!

We decided to look at the puppy and then make a decision. So my daughter and I went to visit Tequila and, of course, returned home with the cutest gold-colored puppy with gold-colored eyes—adorable!

Well, what to call this little creature? At first we called him Willy, but after our neighbor’s son, Willy, responded again and again to all of our calls to the puppy, we decided to expand the name to Chilly Willy. (It also helped that the neighbor moved.)

Chilly Willy became a fixture in our home, joining our aforementioned dog, Koko, and our also-rescued cat, Mugsy. Chilly Willy totally disrupted the quiet existence of these two animals, who patiently put up with all the interrupted naps and other routines they had developed over the years. And let’s not forget our own interrupted routines—no, make that lives!

As you know, as puppies grow their energy expands exponentially. Chilly Willy was 2 in July and has stopped growing, but his energy level keeps rising. At first, a walk in the morning seemed to take care of this, but soon the walk had to be extended to two miles (my husband does the morning duty).

Then it became obvious that one walk a day wasn’t enough, so we added another two miles in the evening (that’s my duty)—and then we had to throw in some play time. Consider feeding, grooming, bathing and cleaning teeth—it seems that we have a full-time job with this “gift” of ours.

Because of his exuberance, we decided to enroll Chilly Willy in “doggie school.” This is a weekly adventure shared with other dogs and a wonderful young man who seems to know exactly what and how dogs think. There’s a lot of flexing of muscles, a lot of protecting territory and baring of teeth, but in the end we all seem to have a lot of fun. After one and a half hours of constant instruction and exercise, Chilly Willy and I arrive home exhausted.

So maybe I am dyslexic. Maybe I do mean a “Gift from God.”