Antigüeños are in for a special treat this month when the work of the very talented and spirited photographer Eny Roland Hernández will be featured in a solo exhibition at La Galeriá Mesón Panza Verde in La Antigua Guatemala.

Even better is that our beloved Antigüeños are the subject matter of this playful and provocative new show titled Pueblo Chico, Infierno Grande – Small Town, Big Hell! 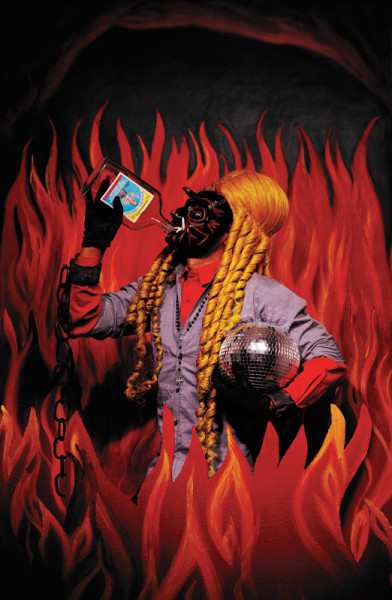 Drawing on inspiration from a theatrical street dance that dates back more than 400 years, Eny cleverly turns this Guatemalan tradition into a forum for poking fun at contemporary life in Antigua. Every December, the Dance of the 24 Devils is performed in Ciudad Vieja, a town near Antigua, to honor the Virgin of the Immaculate Conception. The devil actors who roam the streets in search of other depraved souls are dressed in fiery-red costumes, blonde wigs and scary-looking wooden masks.

“I have always been fascinated by these devils,” said Eny, “each one representing a sinful trait such as drunkenness, self-righteousness or greed. Then, it occurred to me I could have some fun with this story, inject a bit of humor and create a more contemporary sense through photos by making it about life in Antigua.” Eny enjoys mixing religious imagery with contemporary themes, a dominant trademark of this gifted photographer.

Eny explained that since so many of his works have been exhibited in Guatemala City over the past several years, he really wanted to have a show in Antigua about life in a smaller town. “I decided to talk with my friends who live here to ask what they don’t like about Antigua, elements of daily life or circumstances you could only know exist after having lived here for a long time. I wanted to address issues that outsiders like tourists could not be privy to,” he stated.

Eny, who grew up in Guatemala City, attended the Universidad Mariano Galvez where he studied communications and photography. After a two-year stint as a photojournalist with a major news outlet, he realized that portrait photography was his true love. With his newly found passion and love for portraiture, Eny took on current events and contemporary themes by creating photos that explore topics such as religion, gender, politics and eroticism.

How we communicate photographically has changed dramatically over the past few decades. Rather than simply recording events, portrait photography has become a means of expression and interpretation that can extend into an emotional experience. Portraits, unlike other art forms, are easier to connect to because people tend to be drawn to other people.

In Small Town, Big Hell, each portrait addresses a moral transgression represented by one of the 24 devils. One of these devils is Antigua’s former mayor portrayed as the Diablo Alcalde who is currently in prison on corruption charges. More playful is the Diablo Citadino, representing the stereotype who comes to Antigua just to party and have fun, drinks too much and then complains about the cobblestone streets.

“It’s more about attitude,” said Eny. “You can live in a beautiful place, but if the people have a bad attitude, they can be the devil. So for me the attitude determines whether a small town is a good place or a big hell.” 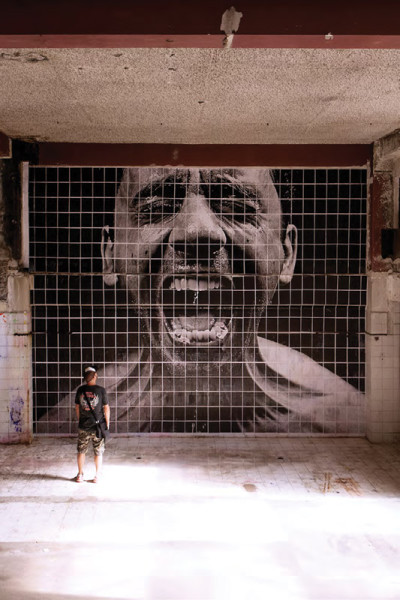 Many of the works of Eny Roland Hernandez have appeared in collective exhibits throughout Guatemala and Central America as well as in Miami (Florida), Denmark and Spain. Some of his most recent shows in Guatemala City include Las Penitentes de la Recolección at the Museo Nacional de Arte Moderno, Carlos Merida and San Sebastián y la Muerte at Teatro Lux, which was part of GuatePhoto 2015.

“We are delighted to be presenting the work of such a talented young artist who has taken a traditional Guatemalan theme and given it a creative new spin,” said Gavin Kern, curator of Pueblo Chico, Infierno Grande.

Complementing this exhibit will be Eny’s Urban Photography Project, which began in Guatemala City several years ago. “We are looking forward to making this exhibit a true public art experience by taking it and expanding it out onto the streets,” Kern added.

Proyecto Galeria Urbano is about making portrait photography on a grand scale accessible to the public for everyone to enjoy and ponder even if it’s only temporary. Cities and towns, after all, are a living and breathing space, and in constant flux. Some of these murals will be displayed on the streets of Antigua in April. Information about their exact locations will be posted on this website, as they become available. 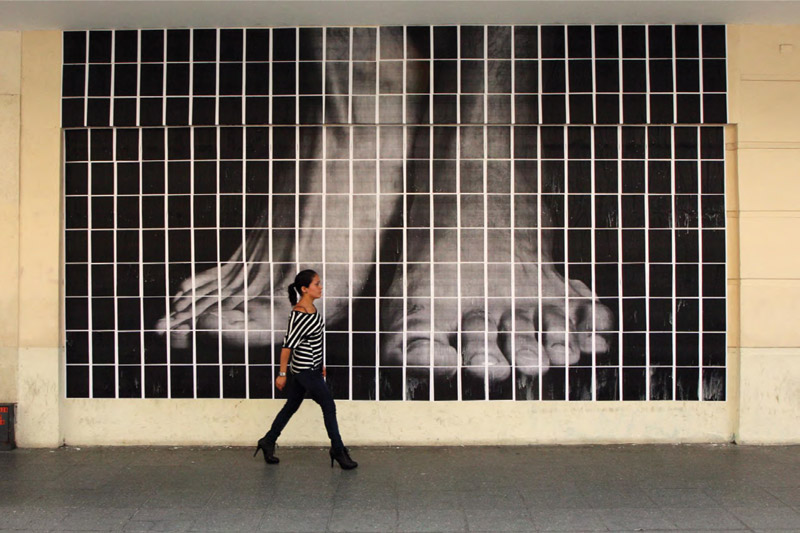 For more information about Eny’s art, go to enyroland.com

“You must have the devil in you to succeed in the arts.”  —Voltaire