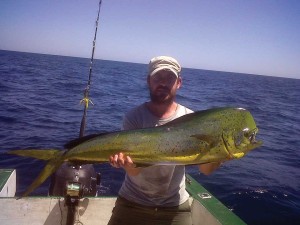 How Parlama owner Dennis Wheeler came to own his first boat is a once-in-a-lifetime experience not often heard of. He had just returned from a successful fishing trip off the Pacific Coast of Guatemala with a fellow enthusiast, and they were discussing the possibility of Wheeler buying a boat of his own. Wheeler had been fishing all his life, starting when he was a child in the States.

His passion followed him to Guatemala in 1965 where, as a Peace Corps volunteer, he fished to survive in the Petén. Owning a boat seemed like a logical fit for him, but Wheeler was uncertain and had trouble pulling the trigger.

Wheeler’s friend, however, was more confident. “As we were saying goodbye, he reached over and put 1,000 bucks in my shirt pocket, and said, ‘Go out and buy your boat.’ I was ready to go.”
This was the 1970s and boats cost more than $1,000, but it was a good start. With his new lancha, he started taking local volunteers on short day trips, fishing for dorado and billfish. Over the years, he obtained one boat after another. Parlama is now a fleet of six, the newest additions being 28’ and 36’ yachts. Four are docked in Puerto San José and two in Río Dulce.

Parlama fishes for marlin, sailfish (catch and release only) and dorado, the best time being from October through April. Parlama boats are stocked with all the equipment an angler needs. Rods are custom-made by Pat Brian, a friend of Wheeler’s in Austin, Texas, and are outfitted with Shimano reels. Parlama’s prices are some of the most reasonable in Guatemala. A half-day trip for three on a lancha runs $375. A half-day trip on the 36’ yacht (which can accommodate up to 9 people), costs $600 and $1,200 for a full day. In addition to deep-sea and coastal fishing, Parlama offers half-day or full-day ocean safaris for whale watching or simply taking in the rich Guatemalan sun on the open ocean.

The world of deep-sea fishing has changed since Wheeler bought his first boat. With evidence pointing to a drastic change in the world’s oceans due to climate change, one would expect Wheeler to say he has seen a drop in the number of fish caught now than in the past. Wheeler, however, says in the last few years, he has seen an increase in the number of fish Parlama’s clients catch—especially marlin. Whereas five years ago, a boat would hook four marlin every year, the last two years his boats have hooked a marlin almost every trip. He equates this to the water temperature and currents in “The Pocket,” a deep trench that spans from El Salvador up to Mexico where many local species like to dwell.

Conscious of these changes, Wheeler feels a responsibility to preserve and protect the fish population in addition to providing a grand maritime adventure for his clients. Parlama gave up using standard J-hooks, the industry choice for many years, in favor of fine wire circle hooks. The former left marlin and other fish with considerable damage when released if the hook caught in the wrong place, like the gut. Wheeler states not only do circle hooks work better for catching billfish, but also leaves them in great shape after they are released.
When he speaks about his fishing operation, it’s clear he respects the territory and wants to leave it as untouched as possible. Wheeler states, “The idea is to leave a small footprint.”