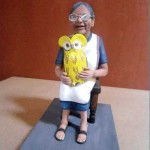 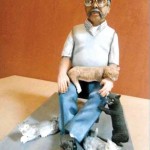 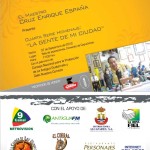 “Quique” explains that he taught himself how to work with clay at the age of 6. He begins with the clay from the traditional site of El Tejar, Chimaltenango, and molds ornate figures. After baking them in an oven, he paints them with bright acrylic paints. He began creating life-like, beautifully painted birds from Guatemala, which many of us collected over the years as Christmas tree ornaments and home decorations.

Quique is also well known for renditions of famous figures such as Nobel Prize winners Rigoberta Menchú and Miguel Ángel Asturias and the Guatemalan artist/architect who designed the National Theater, Efraín Recinos.

He has participated in forums and festivals in Germany, Spain, Italy, the United States and other countries, including the opening of Mundo Maya in the Dominican Republic in 2010.

Quique also has a splendid exhibit of the works and life of Santo Hermano Pedro at the Obras Sociales del Hemano Pedro. His last exhibit in Antigua was in 1998. Enrique Cruz España’s works are considered part of Antigua’s cultural heritage.

His workshop is located in San Felipe de Jesús #58, zone 1 (on the same street as the General Hospital) Tel: 4121-4200; email: cruzenriquespana@hotmail.com

We look forward to seeing you at the opening of La Gente de mi Ciudad.